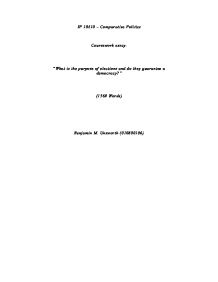 What is the purpose of elections and do they guarantee a democracy?

It would be impossible though to use a pure national list system though, because if one political party took 3.7% of the vote, they can not be awarded with 3.7% of seats, as each seat is a whole number. This is why it is almost impossible to ensure a pure democracy, as if they were awarded 3% of the seats they would still not be represented fully according to voting, but if they were awarded 4% they would be over-represented. The only way to get around this is by using 'top-up' MPs, but this by its very nature is undemocratic - unelected representatives is a key feature of authoritarianism, not democracy. To try and counter this problem there is a proportional representation system which 'transfers' votes so that unelected representatives do not have to be used. The "Single transferable vote" system is based on multi-member constituencies, and each voter ranks candidates (1,2,3 etc.) and is based on quotas. In a five member constituency parties This system, however, would penalise independent candidates who can not take 2 seats, as they stand alone. As independents are the epitome of democracy - they can not be pulled into line by party whips and go against the interests of their constituents in favour of the party line - then this system is favourable against the whole ethos of democracy. ...read more.