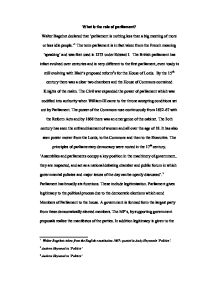 What is the role of parliament?

What is the role of parliament? Walter Bagehot declared that 'parliament is nothing less than a big meeting of more or less idle people.'1 The term parliament is in fact taken from the French meaning 'speaking' and was first used in 1275 under Edward I. The British parliament has infact evolved over centuries and is very different to the first parliament, even toady is still evolving with Blair's proposed reform2s for the House of Lords. By the 15th century there was a clear two chambers and the House of Commons contained Knights of the realm. The Civil war expanded the power of parliament which was codified into authority when William III came to the throne accepting conditions set out by Parliament. The power of the Commons rose continuously from 1832-67 with the Reform Acts and by 1868 there was an emergence of the cabinet. The 2oth century has seen the enfranchisement of women and all over the age of 18. It has also seen power mover from the Lords, to the Commons and then to the Executive. The principles of parliamentary democracy were rooted in the 17th century. 'Assemblies and parliaments occupy a key position in the machinery of government.. they are respected, and act as a national debating chamber and public forum in which governmental policies and major issues of the day can be openly discussed'.3 Parliament has broadly six functions. ...read more.

Parliament 'Provides a pool of talent form which leading decision makers emerge'.6 However, it is argued that parliament can corrupt MP's by socialising them into 'norms and values' When MP's become ministers very few of them have the skills to run managerial posts within departments. Legislation and law making is often seen as the key role of parliament, laws are seen to be binding and authoritative if given approval by an assembly such as parliament. A Bill is scrutinised on 2 occasions in the House of Commons and again in the House of Lords. Bills can change during this process and MP's can influence legislation, for example in favour of their constituents. Parliament suggests that the people make the laws themselves as the MP's are representatives of the electorate The final role of parliament is deliberation and debate, which allows key issues to be discussed and considered in ways which, have already been examined in this essay. Parliaments role is ever-changing, and has evolved over many years, today the executive sets the legislation programme and with a majority in the House of Commons is able to pass a good majority of these. Power has indeed passed from the Lords to the executive via the Commons. Despite this Parliament is still considered to play a vital role in the British constitution and many people respect it in the functions it performs. ...read more.

Although the House of Lords can introduce Private members Bills they are prone to failure and so the Commons has more power where introducing bills are concerned. Despite this the Lords is still a dominant force in delaying Bills for up to a year and can amend bills coming through the house, this along with restrictions on time within government can make the executive drop proposed legislation. Most distinctively the House of Lords has expertise which allow for a much greater scrutiny of Legislation than in the House of Commons, where few ministers have the expertise to run their own departments. Finally, and most notable is that the House of Lords is the highest court in the land and the supreme court of Appeal. This is considered the greatest difference between the Commons and the Lords. The Commons undoubtedly has more power than the Lords, and this gap is likely to only get bigger. However the Commons has diminished gradually as its power is transferred to the executive. In a democratic country it is felt that both chambers are needed, the Lords giving an unprecedented amount of knowledge and expertise to the political system which can not be found in the Commons. 1 Walter Bagehot- taken from the English constitution 1867- quoted in Andy Heywoods 'Politics'. 2 Andrew Heywood in 'Politics' 3 Andrew Heywood in 'Politics' 4 Heywood in 'politics' 5 Moyra Grant- 'An introduction to politics' 6 Moyra Grant- 'An introduction to politics' ...read more.