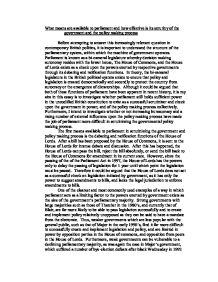 What means are available to parliament and how effective is its scrutiny of the government and the policy making process Before attempting to answer this increasingly relevant question in contemporary British politics, it is important to understand the structure of the parliamentary system, within which the machine of government operates. Parliament is known as a bi-cameral legislature whereby decision making autonomy resides with the lower house, The House of Commons, and the House of Lords exists as a check upon the powers exerted by respective governments through its debating and ratification functions. In theory, the bi-cameral legislature in the British political system exists to ensure that policy and legislation is created democratically and secondly to protect the country from autocracy or the emergence of dictatorships. Although it could be argued that both of these functions of parliament have been apparent in recent history, it is my aim in this essay is to investigate whether parliament still holds sufficient power in the uncodified British constitution to exist as a successful scrutinizer and check upon the government in power, and of the policy making process collectively. ...read more.

It is also apparent that the powers of parliament to scrutinize the government and the policy making process are unlikely to be realized under the current First Past the Post voting system which almost guarantees large parliamentary majorities for newly elected governments. Thus I believe it would be fair to say that under the current contemporary British political system, it is clear that parliament has insufficient powers to scrutinize the activities of government as well as the policy making process itself which is supported directly by the arguments and evidence I have presented in this essay. It could be argued that one way in which the abilities of parliament to scrutinize government and the policy making process could be widened, would be to alter the composition of both select and standing committees so that the government in power would not have a majority in each committee, and thus the activities of government could more easily brought to account. A further way of increasing the aforementioned powers of parliament could be to pass legislation to overturn the Official Secrets Act of 1989 and the culture of secrecy apparent in the contemporary British political system, forcing governments to disclose information on sensitive political issues to parliamentary committees, and bringing the activities of government to light more effectively. ...read more.