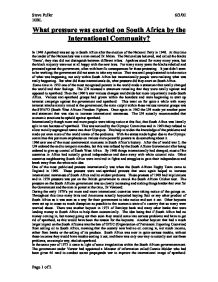 What pressure was exerted on South Africa by the International Community?

What pressure was exerted on South Africa by the International Community? In 1948 Apartheid was set up in South Africa after the election of the National Party in 1948. At this time the leader of the Nationalists was a man named Dr Malan. The Nationalists believed, and called the blacks 'Bantu', they also did not distinguish between different tribes. Apathies stood for many many years, but the black majority were not at all happy with the new laws. For many many years the blacks rebelled and protested against the government, often with horrific consequences for those protesting. It just didn't seem to be working; the government did not seem to take any notice. That was until people started to take notice of what was happening, not only within South Africa but internationally people were realising what was really happening. But what did these internationals do, what pressure did they exert on South Africa. Some time in 1952 one of the most recognised powers in the world made a statement that totally changed the world and their feelings. ...read more.

These protests were anti-apartheid protests that once again helped to increase international awareness of South Africa and its evident problems. These protests of 1969 had implications and in 1970 pressure was put on the British government to cancel the South African Cricket tour. The pressure on the South African government was so clearly increasing and making things harder that ever for the Government and the man in power at the time, Dr Vewoerd. During the early 1970's yet more and more international countries were taking notice of the goings on. Throughout this time many brits and Americans actually boycotted buying fruit or any other product of South Africa as it was seen as a way for their government to take notice and sort it out. Other boycotts were set up to cause as much disruption as possible to the economic state of a country that so many were worried about. There was another boycott in 1973 of Barclays bank and many other banks that were lending money to South Africa to help them economically. The idea being that if South Africa had no money coming in, but money going out then soon they would come into serious problems and have to get rid of apartheid, as this would have been the reason for the boycotts. ...read more.

The main problem being that this pressure was not really caused by the governments of these international countries but instead from the people of these powers. Like the British people that worried enough about the apartheid that they boycotted various produce and banks and even protested enough to seriously disrupt the sporting sides of their own nation and the visitors, South Africa. The only real power that seemed to intervene, and not surprisingly, was the UN who mad various statements and orders saying that Apartheid was bad, and to get rid of it. These orders and pressure were obviously not significant enough to make a real impact on it as it did not make terrible difference but instead cause the international people to sit up and take notice, thus causing the boycotts and protests. Although there was some pressure put upon South Africa this was by no means enough to make any real difference to the situation inside the boarders. There should have been considerably more pressure from the governments of opposing countries, not just the people, there is a limit to the power of the people but the governments could have made a considerable difference, but they chose not to. Steve Fuller 6/3/02 10BL Page 1 of 2 ...read more.