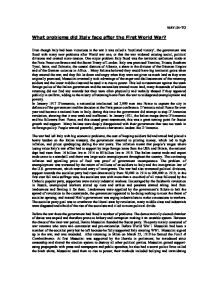 What problems did Italy face after the First World War?

WAYLIN-TO What problems did Italy face after the First World War? Even though Italy had been victorious in the war it was called a 'mutilated victory', the government was faced with many new problems after World war one, or that the war widened existing social, political divisions and created more tension. One major problem Italy faced was the territorial settlement made at the Paris Peace conference and the Secret Treaty of London. Italy was promised Trentino, Trieste, Southern Tyrol, Istria, and Dalmatia, the coastal districts of Albania, a share in the division of the Ottoman Empire and of the German colonies in Africa. . Many Italians believed they would have big territorial gains when they entered the war, and they felt let down and angry when they were not given as much land as they were originally promised, Mussolini eventually took advantage of the anger and disillusionment of the returning soldiers and the lower middle class and he used it to rise to power. ...read more.

The problem of unemployment was worsened by the return of millions of ex-soldiers to Italy and the immigration law of the U.S. government, which restricted entry of immigrants. The war had also worsened political divisions, support towards the socialist party had risen dramatically from 50,000 in 1914 to 200,000 in 1919, in the first ever full male suffrage vote, the socialists won with more than a one-third of all votes followed by the Catholic popular party, supporters were mainly industrial workers. Encouraged by the Bolshevik revolution in Russia, unemployed workers stirred up riots and strikes and peasants started taking land from landowners and farming it for them. Landowners were appalled by the government's failure to halt the spread of revolution to the countryside, the government appeared to be doing nothing to meet the threat of socialist uprising, and instead Nitti's government was urging industrialists to make concessions to workers. The socialist party goal was to overthrow the liberal state by revolution, many middle class and industrials were disgusted and afraid of the rise of the socialists and it led to more political divide. ...read more.

Mussolini's rising to power is typical of how dictators rose to power during the inter-war period. This was by beating the government down through brutality and intimidation until it had no choice but to legally accept the imposed government. Before the war started, Italy already had problems. There was a north-south divide with the north more economically advanced and the poverty stricken south. There were low literacy rates and only 12% of the population spoke Italian. From 1870 liberals ruled -1915 Italy, for 20 years there was domestic peace and economic growth until the 1890s witnessed widespread popular protest. Other political parties, Catholicism, socialism and nationalism were challenging Liberalism. From 1914 the liberal parliament was faced with problems. The number of socialist MPs was growing. The government were reliant on the Catholics for electoral support and nationalists were putting pressure on them, to let Italy join the war, it was a time of great political division. I think the war widened these divisions and led to the fall of the liberal regime and the rise of the fascist dictatorship. ?? ?? ?? ?? ...read more.