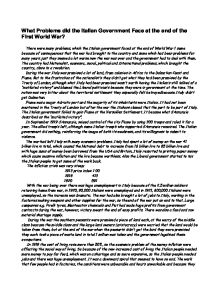 What Problems did the Italian Government Face at the end of the First World War?

What Problems did the Italian Government Face at the end of the First World War? There were many problems, which the Italian government faced at the end of World War 1 some because of consequences that the war had brought to the country and some which had been problems for many years just they seemed a lot worse now the war was over and the government had to deal with them. The country had Nationalist, economic, social, political and International problems, which brought the country, close to a revolution. During the war Italy was promised a lot of land, from colonies in Africa to the Dalmatian Coast and Fiume. But to the frustration of the nationalist's they didn't get what they had been promised by the Treaty of London, although what Italy had been promised wasn't worth having the Italian's still talked of a "mutilated victory" and blamed the Liberal politician's because they were in government at the time. The nation was very bitter about the territorial settlement they especially felt betrayed because Italy didn't get Dalmatian. Fiume was a major Adriatic port and the majority of its inhabitants were Italian. ...read more.

were worried that the land would be taken from them, but at the end of the war when the peasants didn't get the land they were promised they each took a piece of waste land in total 1 million was taken and the government legalised these occupations. In 1919 the cost of living rose more than 50%, so the economic problem of the money inflation were affecting the social way of living. So because of the new increased cost of living the Italian people needed more money to pay for food, which was on a shortage and so more expensive, so the Italian people needed jobs and there was huge unemployment. It was a downward spiral that seemed to have no end. The work that few people had in factories, the conditions were unbearable and hour's unworkable and because they were so bad the workers started a strike all over the north of Italy. In 1919 over 1 million workers took part in the strike and by 1921 almost 8 million workdays were lost by strikes. The factories needed the workers and so were forced to improve the working conditions and working hours. ...read more.

But once again these reforms didn't satisfy and worried the elite. Generally, the succession of weak liberal governments failed to solve Italy's social, economic and political problems. The social government made concessions to try and win support of the lower classes. The government set up food committees in response to the food riots. The conservatives (landowners and industrialists) were disgusted with the liberal government who appeared to be doing nothing to deal with the socialist threat. The socialists were failing in trying to run the government and gain support for many reasons e.g. they talked of revolution and the Italian people did not want that. The socialists didn't get the message across to the people in the south due to bad communication this could be because they are a newly formed party and didn't have much experience. The failure of the government to deal with the socialist unrest gave the Fascists their opportunity to show Italy that they had the power to run the country. The threat of the revolution led many of the elite to support the Fascists. So there were many problems that the Italian government faced at the end of the First World War some because of the war and some problems, which were there at the start of the war but all forced Italy into a slump. ...read more.