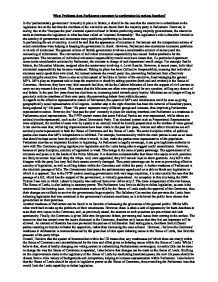 What Problems does Parliament encounter in performing its various function?

What Problems does Parliament encounter in performing its various function? In the 'parliamentary government' currently in place in Britain, it should be the case that the executive is subordinate to the legislature due to the fact that the members of the executive are drawn form the majority party in Parliament. However, in reality, due to the 'first past the post' electoral system utilised in Britain producing strong majority governments, the executive tends to dominate the legislature in what has been called an 'electoral dictatorship'. The legislature's role is therefore limited to the scrutiny of government and encounters many problems performing its functions. In performing the act of scrutiny, it could be said that the appearance of ministers in Parliament and the independent actions of select committees were helping in keeping the government in check. However, Parliament also encounters numerous problems in its role of scrutiniser. The general culture of British government involves a considerable amount of secrecy and the concealing of information. The convention of individual ministerial responsibility has caused further problems for the government. The convention of individual ministerial responsibility would once have meant that, if a particular department came under considerable criticism by Parliament, the minister in charge of said department would resign. ...read more.

It can also be seen that, whilst big improvements have been made in the past few years, women and ethnic minorities are still seriously under represented in both the House of Commons and the House of Lords. The strict discipline within all political parties also means that MP's independence is inhibited. For example, homosexuality within the main parties is seen as an issue that should be kept secret from the public when it would, in fact, make the parties more representative of the population. Parliament also has an important function in legislating. As Parliament is legally sovereign, it can give legitimate authority to laws with The Commons giving legitimacy to legislation and the Lords being able to suggest useful amendments. However, because of party discipline, scrutiny of legislation is weak. This brings in the issue of party patronage. The appointment of all ministers and peers is in the hands of the Prime Minister. It is therefore understandable that those who aspire to such positions are likely to remain loyal and obey the whips. And, once appointed, they will remain loyal to show gratitude. Any MP's who disagree with the party line may find their careers severely damaged. ...read more.