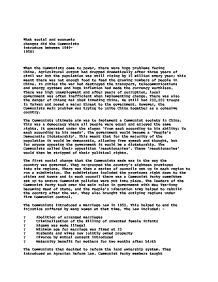 What social and economic changes did the Communists introduce between 1949-1958?

What social and economic changes did the Communists introduce between 1949- 1958? When the Communists came to power, there were huge problems facing China. Agricultural output had dropped dramatically after three years of civil war but the population was still rising by 15 million every year; this meant there was not enough food to feed the growing numbers of people in China. In cities the war had destroyed the transport, telecommunications and energy systems and huge inflation had made the currency worthless. There was high unemployment and after years of corruption, local government was often inefficient when implementing change. There was also the danger of Chiang Kai Shek invading China. He still had 200,000 troops in Taiwan and posed a major threat to the government. However, the Communists main problem was trying to unite China together as a cohesive country. The Communists ultimate aim was to implement a Communist society in China. This was a democracy where all people were equal and enjoyed the same rights. It operated under the slogan 'From each according to his ability; To each according to his needs'. The government would become a 'People's Democratic Dictatorship'. This meant that for the majority of the population it would be democratic, allowing free speech and thought, but for anyone opposing the government it would be a dictatorship. The Communists called their opposition 'reactionaries'. These 'reactionaries' would then be stripped of their political rights. The first social change that the Communists made was in the way the country was governed. They re-grouped the country's eighteen provinces into six regions. There was then a series of councils set up in each region to run a subdivision. The subdivisions included the provinces right down to the cities and towns and in each council there was a Communist Party committee set up to ensure Communist policies were put into place. The leaders of the Communist Party took over the main roles in government with Mao Tse-Tung becoming Head of State, and the People's Liberation Army helped to rebuild the country after the war. ...read more.

The government knew they had to sort out China's economy. The first step was to nationalise all the major banks, the railway network and around a third of heavy industry. Then a 'People's Bank' was opened to replace the private banks. This achieved total eradication of inflation by the mid 1950's. To combat food shortages, farmers were made to sell 15-20% of the grain at a low price to the government and pay an agricultural tax that was then used to put the Agrarian Reform Law into effect. Between 1950-1951 the government organised huge rallies where 'reactionaries' were tried and often executed. More than 1 million were killed. In 1951 the Communists began the 'thought reform' movement. This involved close study of Mao's work to re-educate 'reactionaries'. They also began 'mass campaigns' to make the people concentrate on specific problems. In 1951 the 'Three Antis Campaign' was launched against: - ? Corruption ? Waste ? Too much 'red tape' A year later the 'Five Antis Campaign' was launched. This targeted: - ? Bribery ? Tax evasion ? Fraud ? Theft of government property ? Spying People found guilty were sent for 'thought reform'. People were then encouraged to join Party-run interest groups. These included the Women's League for Democracy and the China-Russia Friendship Association, and because the party controlled these organisations they could easily influence the members to do what the party wanted. After Mao's trip to the USSR for talks with Josef Stalin in 1949, China drew up the first 'Five Year Plan' with help from their Russian counterparts. The Plan gave priority to heavy industry and also aimed to increase the output from the farms to feed the increasing number of workers. This was to be achieved by turning China's farms into cooperatives. The government feared that the peasants would not be able to farm their land efficiently enough to produce enough food for the targets set by the Five-Year Plan. They therefore decided to persuade peasants to join lower- stage cooperatives. ...read more.

To achieve improvement in both industry and agriculture, the Communist Party believed that the people must be organised into communes. These consisted of about 5000 families who gave up all their land, animals and equipment to the commune and were believed to be able to release 'the tremendous energy of the masses'. The communes were organised so that nothing would distract the people from their work. There were: - ? Communal eating halls to reduce the amount of people who had to cook ? Nurseries and schools set up so that parents would not have to spend time looking after children ? 'Houses of happiness' set up for old and frail people so that their families did not have to look after them Communes became centres of local government with peasants, Communist Party members and soldiers running public services. They also organised the work for the members of the communes. The communes were used as branches of the Communist Party, allowing the government to ensure that party policy was being fulfilled. By the end of 1958 90% of the population of China had been placed into communes. Propaganda played an important role in retaining the people's enthusiasm. People were urged to work long hours whatever the weather and loudspeakers played rousing speeches to encourage the workers. Even with little equipment, the people still completed astonishing projects in record time. There was huge change in China on both a social and an economic level between 1949-1958. Many private companies were nationalised which allowed the government to have more control over the economy e.g. they did away with inflation by the mid 1950's. Working conditions changed drastically with the introduction of the communes and major industry. Yet the most significant change was social; the bridging of the gap between the rich and poor classes. A lot of the change was extremely difficult for the people to cope with but through their own belief in the government and the propaganda used to inspire them, they managed to shape China into a more developed and prosperous country. 5 David Thompson ...read more.