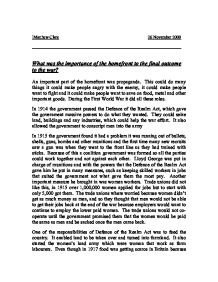 What was the importance of the homefront to the final outcome to the war?

Because of this a coalition government was formed so all the parties could work together and not against each other. Lloyd George was put in charge of munitions and with the powers that the Defence of the Realm Act gave him he put in many measures, such as keeping skilled workers in jobs that suited the government not what gave them the most pay. Another important measure he brought in was women workers. Trade unions did not like this, in 1915 over 1,000,000 women applied for jobs but to start with only 5,000 got them. ...read more.

One of the responsibilities of Defence of the Realm Act was to feed the country. It enabled land to be taken over and turned into farmland. It also started the women's land army which were woman that work as farm labourers. Even though in 1917 food was getting scarce in Britain because of the U-boat campaign the government responded by raising the wages of workers, voluntary rationing and asking people to be sparing with bread. But these measures did not work and in 1918 compulsory rationing of butter, sugar and beer was brought in. Rationing was welcomed as every one was getting the same. ...read more.