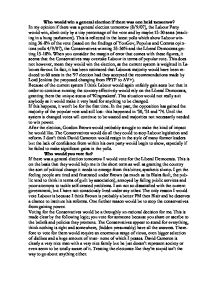 Who would you vote for?

Who would win a general election if there was one held tomorrow? In my opinion if there was a general election tomorrow (8/9/07), the Labour Party would win, albeit only by a tiny percentage of the vote and by maybe 15-30 seats (resulting in a hung parliament). This is reflected in the latest polls which show Labour winning 36-8% of the vote (based on the findings of YouGov, Populus and Comres opinions polls 4/9/07), the Conservatives winning 35-36% and the Liberal Democrats getting 15-18%. When you consider the margin of error that comes with these figures, it seems that the Conservatives may overtake Labour in terms of popular vote. This does not however, mean they would win the election, as the current system is weighted in Labours favour. In fact, it has been estimated that Labours majority would have been reduced to 60 seats in the '97 election had they accepted the recommendations made by Lord Jenkins (he proposed changing from FPTP to AV+). Because of the current system I think Labour would again unfairly gain seats but that in order to continue running the country effectively would rely on the Liberal Democrats, granting them the unique status of 'Kingmakers'. This situation would not really suit anybody as it would make it very hard for anything to be changed. ...read more.

This is demonstrated through their stance on Air Passenger Duty. They would transport the tax from the passenger to the plane, leaving the air companies to find new ways of making flying more ecological and stop them from flying half empty. This idea would be applied to the consumer side of things as well- making it profitable to buy vehicles that pollute less (I.E. increasing or decreasing Vehicle Excise Duty as necessary). I think its time people driving environment damaging cars must recognise the cost. Another thing the government really needs to sort out and allow is transparency of spending- so people know where their money is going. I think if people could see what little difference top-up and tuition fees have made, they would be less willing to support them. I agree with the Conservative notion of supporting small businesses as a lot of entrepreneurial spirit seems to be lacking in todays society. This could be achieved a lot easier though, if the country were to adopt the Lib Dems 50% tax on those earning over 100,000 and with a switch to income tax. Income tax is much fairer, and more financially supportive to those that need it the most. Don't get me wrong though, I think Labour and Brown in particular managed the economy well. ...read more.

Even so, it sounds a better idea than building more prisons. One thing that does make me angry at the Lib Dems is their pro-euro stance. I think that maybe when the notion was put forward, there were many arguments for joining the continent in the single currency. But for one reason or another we didn't, and as time has gone on those arguments have faded away. I think compromising our strong economical state at the moment would be a poor decision on behalf of the nation. Even foreseeable negative side-effects of having a strong currency have yet to surface. Our tourism industry is still thriving and we trade freely within the EU. Despite this, the Lib Dems redeem themselves on many counts by having the most youth directed policy, and in some ways, the fairest. No top up or tuition fees, free care for the elderly and a full pledge to reduce the public/state school gap. They the only real chance of a party with green credentials getting into power and I believe what is letting them down at the moment is the public view of their leader, who is seen as old and boring, general ignorance about their polices and for fear that a vote for them is a vote lost for Labour is a vote gained for the Conservatives. Still, it makes the most sense for me and ultimately, for the country. Harry Quinn Schone ...read more.