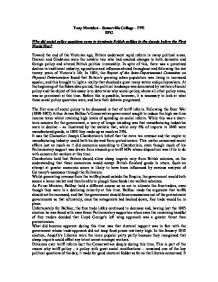 Why did social policy questions come to dominate British politics in the decade before the First World War?

Tony Marsden - Somerville College - PPE BPG Why did social policy questions come to dominate British politics in the decade before the First World War? Toward the end of the Victorian age, Britain underwent rapid reform in many political areas. Disraeli and Gladstone were the notable two who had enacted changes to both domestic and foreign policy and altered British politics irrevocably. In spite of this, there was a perceived decline in traditional industry, agriculture and influence abroad throughout and following the last twenty years of Victoria's life. In 1904, the Report of the Inter-Departmental Committee on Physical Deterioration found that Britain's growing urban population was living in increased squalor, and this brought to light a reality that shocked a great many voters and policymakers. At the beginning of the Edwardian period, the political landscape was dominated by matters of social policy and the object of this essay is to determine why social policy, above all other policy areas, was so prominent at this time. Before this is possible, however, it is necessary to look at what those social policy questions were, and how their debates progressed. The first area of social policy to be discussed is that of tariff reform. ...read more.

Aside from tariff reform, which has already been outlined, there were few radical solutions proposed until David Lloyd George's budget of 1909. In this budget, Lloyd George proposed legislation to pave the way for land taxes. Although the budget did not enact the taxes immediately, it proposed an evaluation of all land to the end that it should later come to be taxed according to its value. At the same time, the budget was to introduce state pensions. The 1909 budget was a key contribution to questions of social policy not just in the pre-WW1 years, but well beyond that. Firstly, it set in motion the radical motions toward a welfare state with a graduated redistributive tax to be placed on land. Secondly, it gave individuals beyond working age the right to income from the state. Thirdly, it set back the protectionist debate by showing that social reforms were possible under free trade. Lastly, it secured strong Labour loyalty when it became apparent that the budget was to result in a standoff with the Lords. These four facts were significant in reshaping the way British politics was to deal with social policy. ...read more.

There were, for example, over 2,500 school boards in the country each with insufficient power to operate effectively. It was characteristic of National Efficiency thinking that governments should begin to operate with less involvement of full Cabinet, and greater use of Cabinet committees in order to bypass the quarrelsome and delaying executive body. By doing this, the overbearing desire for social debate was able to overcome the agenda and gain momentum. The legacy of Gladstone and the Irish question would appear also to have had some influence on the Edwardian agenda. By the 1890s, the Liberals had managed to alienate middle class support by being the party largely seen as the advocates of Home Rule and little else. In this way, the party's support came from little more than those wishing to protest and those going with the fad. It was well apparent to the Liberals and the country by the mid 1890s that Home Rule was a hopeless Gladstonian archaism which had to be forgotten, mainly because it would never pass through the Lords. So, by shaking off the shadow of Home Rule, and then later their awkward differences over the Boer War, the Liberals were able to unite under Asquith and take issue with the Conservatives over matters they had longed to contest for some time. ...read more.