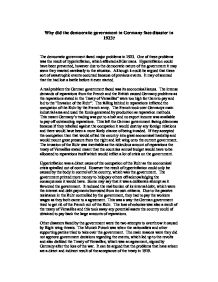 Why did the democratic government in Germany face disaster in 1923?

Why did the democratic government in Germany face disaster in 1923? The democratic government faced major problems in 1923. One of these problems was the result of hyperinflation, which affected all Germans. Hyperinflation could have been prevented, however due to the democratic nature of the government it may seem they reacted carelessly to the situation. Although it could be argued that these sort of catastrophic events occurred because of previous events. It may of seemed that the had lost a battle before it even started. A real problem the German government faced was its economical issues. The intense demands of reparations from the French and the British caused Germany problems as the reparations stated in the Treaty of Versailles" were too high for them to pay and led to the "Invasion of the Ruhr". The falling behind in reparations inflicted the occupation of the Ruhr by the French army. The French took over Germanys main industrial area and used the funds generated by production as reparation methods. ...read more.

Some may say that it was a deliberate attempt as it favoured the government. It reduced the real burden of its internal debt, which were the interest and debt payments borrowed from its own citizens. Due to the passive resistance in the Ruhr controlled by the government, they had to pay the workers wages as they both came to a agreement. This was a way the German government tired to get rid of the French out of the Ruhr. The loss of colonies was also a result of the treaty of Versailles and this took away any potential assets the country could of obtained to pay back the large amounts of reparations. Other disasters faced by the government were the two attempts to overthrow it caused by Right wing threats. The Munich Putsch was when the nationalists and other supporting parties tried to take over the government. The main reasons were they did not approve government decisions regarding the events, which led up to the revolts and also disliked the Treaty of Versailles, which was an agreement, signed by Germany after the loss of the war. ...read more.

PR allowed voices to be heard so a wide range of democracy had been introduced so the parliament was full of different parties supporting different ideas. The democratic government faced many disastrous problems mainly due to the loss of the war, as it resulted in the signing of the Treaty of Versailles. Many events can be directly linked back to this for example, the occupation of the Ruhr as Germany fell back on reparations first agreed in the treaty. The occupation of the Ruhr caused economical hardship and gave the government little choice but to print more money to save the country from total collapse. However this led to hyperinflation and followed by many political threats as the government was weakened. The PR system was a catalyst for threats as it gave people freedom of speech and a chance of representation in parliament. The Treaty of Versailles included harm terms and many German people were angry and bewildered to why the government agreed to it, which also sparked a reason to overthrow. ?? ?? ?? ?? ...read more.