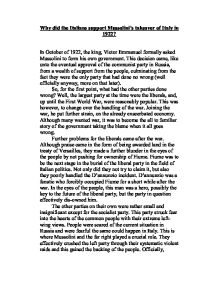 Why did the Italians support Mussolini's takeover of Italy in 1922?

Why did the Italians support Mussolini's takeover of Italy in 1922? In October of 1922, the king, Victor Emmanuel formally asked Mussolini to form his own government. This decision came, like unto the eventual approval of the communist party in Russia, from a wealth of support from the people, culminating from the fact they were the only party that had done no wrong (well officially anyway, more on that later). So, for the first point, what had the other parties done wrong? ...read more.

Further problems for the liberals came after the war. Although praise came in the form of being awarded land in the treaty of Versailles, they made a further blunder in the eyes of the people by not pushing for ownership of Fiume. Fiume was to be the next stage in the burial of the liberal party in the field of Italian politics. Not only did they not try to claim it, but also they poorly handled the D'annunzio incident. D'annunzio was a fanatic who forcibly occupied Fiume for a short while after the war. ...read more.

This is where Mussolini and the far right played a crucial role. They effectively crushed the left party through their systematic violent raids and this gained the backing of the people. Officially, Mussolini's hands were clean and claimed no responsibility for the unruly 'ras', yet behind closed doors, he made no attempt the curb the violence. In conclusion, I believe it was through careful political manoeuvring that Mussolini got into power. Because of this, his party effectively got into power through default. They were the party who had not yet made any mistakes; they seemed a party that could safely make Italy strong again. ...read more.