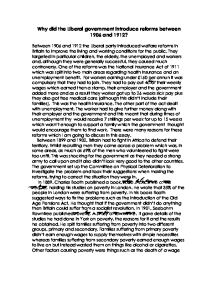 Why did the Liberal government introduce reforms between 1906 and 1912?

Why did the Liberal government introduce reforms between 1906 and 1912? Between 1906 and 1912 the Liberal party introduced welfare reforms in Britain to improve the living and working conditions for the public. They targeted in particular children, the elderly, the unemployed and workers and, although they were generally successful, they caused much controversy. One of the reforms was the National Insurance Act of 1911 which was split into two main areas regarding health insurance and an unemployment benefit. For workers earning under �160 per annun it was compulsory that they had to join. They had to pay out 4d of their weekly wages which earned then a stamp, their employer and the government added more and as a result they worker got up to 26 weeks sick pay plus they also got free medical care (although this didn't include their families). This was the health insurance. The other part of the act dealt with unemployment. The worker had to give further money along with their employer and the government and this meant that during times of unemployment thy would ...read more.

In his books Booth suggested ways to fix the problems such as the introduction of the Old Age Pensions Act. He thought that if the government didn't do anything then Britain could suffer from a socialist revolution. In 1901, Seebohm Rowntree published Poverty, A Study of Town Life. It gave details of the studies he had done in York on poverty, the reasons for it and the results he obtained. He split families suffering from poverty into two different groups, primary and secondary. Families suffering from primary poverty didn't earn enough wages to supply themselves with simple necessities whereas families suffering from secondary poverty earned enough wages to live on but instead wasted them on things like alcohol or cigarettes. Other factors causing poverty were things such as the death of a wage earner, large families and old age and illness, as they couldn't work. These studies showed that poverty in Britain wasn't due to idleness and a lack of education as previously thought, a majority of the people in poverty hadn't reached it though any fault of their own. ...read more.

Lloyd George thought this could be the main contributor to their recent industrial rises and went about bringing in reforms to create a similar workforce in Britain and in the hope that they would again be a leading industrial power. As I have said there were many reasons for the Liberal reforms but one of the main reasons was both competition with and how they were viewed by other countries. Things like the workforce in Britain and the situation they found themselves in during the Boer War don't put out a good message to other countries around the world and, being a leading power, they needed to be healthy, happy and efficient. The results from the studies of Rowntree and Booth showed that poverty was a huge problem and the government had to do something to change this, not neglect it or blame the people themselves as they had previously done. The way to achieve these changes was introduce reforms that would deal with a wide span of the British population. Reforms such as the Old Age Pensions Act and the Children and Young Persons Act were introduced in the years leading up to the First World War. Jess Wills ...read more.