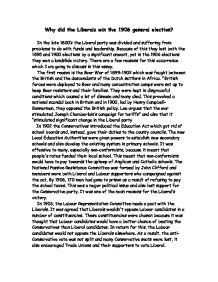 Why did the Liberals win the 1906 general election?

Why did the Liberals win the 1906 general election? In the late 1800's the Liberal party was divided and suffering from problems to do with funds and leadership. Because of this they lost both the 1895 and 1900 elections by a significant amount, yet in the 1906 elections they won a landslide victory. There are a few reasons for this occurrence which I am going to discuss in this essay. The first reason is the Boer War of 1899-1902 which was fought between the British and the descendants of the Dutch settlers in Africa. " British forces were deployed to Boer and many concentration camps were set up to keep Boer resisters and their families. They were kept in disgraceful conditions which caused a lot of disease and many died. This provoked a national scandal back in Britain and in 1900, led by Henry Campbell-Bannerman, they opposed the British policy. ...read more.

It was agreed that Liberals wouldn't oppose Labour candidates in a number of constituencies. These constituencies were chosen because it was thought that Labour candidates would have a better chance of beating the Conservatives than Liberal candidates. In return for this, the Labour candidates would not oppose the Liberals elsewhere. As a result, the anti-Conservative vote was not split and many Conservative seats were lost, it also encouraged Trade Unions and their supporters to vote Liberal. Another explanation for the Liberal victory is the tariff reforms of 1903. The Conservatives were having disputes over whether taxes should be imposed on foreign goods. Arthur Balfour and Joseph Chamberlain had different views on this. Balfour thought that Britain should keep free trade whereas Chamberlain felt the economic future of Britain could be secured by abandoning free trade and replacing it with tariffs that gave preferential treatment to imports from British colonies and that would give British companies that were producing goods for sale in Britain some protection from cheaper foreign goods. ...read more.

This lost support for the Conservative party and eventually the use of Chinese slaves was abandoned. The 'first-past-the-post' electoral system meant that the candidate for each constituency who wins the highest number of votes wins that election. This system exaggerated the Liberals victory of 400 seats compared to the Conservatives 156. There were many reasons for the Liberal victory in the 1906 election but some were definitely more important than others. One of them is the Education Act of 1902 which lost the Conservatives a lot of support. The support for Liberals then increased as they opposed the act and, in turn people who had previously been Conservatives moved over to the Liberal party. Another reason is the tariff reforms which caused splits in the Conservative party. This meant they became a weaker party and were less stable, similar to the Liberals in 1886. A major reason for the Liberal success was because of arguments and bad decisions in the Conservative party which made them seem less stable. This meant that as the Tories became less popular, popularity for both the Liberal and Labour party increased. Jessica Wills ...read more.