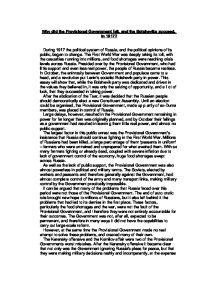 Why did the Provisional Government fail, and the Bolsheviks succeed, in 1917?

Why did the Provisional Government fail, and the Bolsheviks succeed, in 1917? During 1917 the political system of Russia, and the political opinions of its public, began to change. The First World War was deeply taking its toll, with the casualties running into millions, and food shortages were reaching crisis levels across Russia. Presided over by the Provisional Government, who had little support and even less real power, the people of Russia became restless. In October, the animosity between Government and populace came to a head, and a revolution put Lenin's socialist Bolshevik party in power. This essay will show that, while the Bolshevik party was dedicated and driven in the values they believed in, it was only the seizing of opportunity, and a lot of luck, that they succeeded in taking power. After the abdication of the Tsar, it was decided that the Russian people should democratically elect a new Constituent Assembly. Until an election could be organised, the Provisional Government, made up partly of ex-Duma members, was placed in control of Russia. Large delays, however, resulted in the Provisional Government remaining in power for far longer than was originally planned, and by October their failings as a government had resulted in leaving them little real power, and almost no public support. ...read more.

The membership of the Bolsheviks rose, and again people lost faith in the Government in the face of its naivety. Another blunder was part of the Government's plan to tackle the escalating crime levels in Russian towns, by reorganising the police system. The existing system was disbanded, but a new structure never came into effect, and left many areas of Russia with effectively no organised police presence. Faced with an incompetent and weak government, increasing food and fuel shortages, and the lack of police or army presence, much of the country turned to desperate crime. In the country, peasants seized land as fast as they could, often looting and burning the large, stately mansions of landowners as they went. In the towns, where daily bread rations for workers had dropped from 675g to 110g in just seven months, the situation was reaching fever pitch. N Sukanov, living in Petrograd at the time, recalls that '...destruction of homes and shops...unauthorised arrests, seizures and beatings up were recorded every day.' Kerensky and his Provisional cabinet were also partly resented by the public for not having been elected into office, and many suspected that the Government members were trying to delay the Constituent Assembly elections for as long as possible, in order to retain their positions. ...read more.

By 27th October, after just four days, an all-Bolshevik Council of People's Commissars was in place, with Lenin as chairman. Although the Bolsheviks' public support, Lenin's appealing manifesto and strong leadership were important factors in the Bolshevik's success, their main advantage was Lenin's determination to seize the opportunity that he saw before him. The Bolshevik's had missed a number of opportunities in the months before, and October may well have been their last chance, if Lenin's predictions of the election's outcome was correct. It was the failings of the Provisional Government, rather than solely the appeal of the Bolsheviks, that provided this opportunity - had the Provisional Government not been so appalling in its leadership, the Constituent Assembly elections would have taken place as planned, and the Bolsheviks would have remained a marginal party in the Congress of Soviets. The Bolsheviks did successfully capitalise on the Government's waning power and support, and this should not be denied as an achievement. However, as has been shown, their success was due far more to opportunity and luck, and the failings of the Provisional Government, rather than the Bolshevik Party's power itself. In 1917 every person in Russia knew that change needed to happen quickly. The Bolsheviks were the result of that change because they saw the opportunity to capitalise on the situation. ...read more.