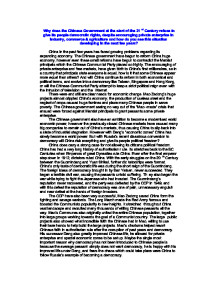 Why does the Chinese Government at the start of the 21st Century refuse to give its people democratic rights, despite encouraging private enterprise in industry, commerce &amp; agriculture and how do you see this situation developing in the next few years?

Why does the Chinese Government at the start of the 21st Century refuse to give its people democratic rights, despite encouraging private enterprise in industry, commerce & agriculture and how do you see this situation developing in the next few years? China in the past few years has faced growing problems regarding its expanding economy. The Chinese government have begun to reform China huge economy, however even these small reforms have begun to contradict the Marxist principals which the Chinese Communist Party placed so highly. The encouraging of private enterprise and free markets, have given birth to China's first millionaires, so in a country that principals state everyone is equal, how is it that some Chinese appear more equal than others? And will China continue its reform in both economical and political terms, and evolve into a democracy like Taiwan, Singapore and Hong Kong, or will the Chinese Communist Party attempt to keep a strict political reign even with the intrusion of television and the Internet. There were and still are clear needs for economic change. Mao Zedong's huge projects almost crippled China's economy; the production of useless steel and the neglect of crops caused huge famines and place many Chinese people in serve poverty. ...read more.

Mao's charisma helped resort Chinese faith in authoritarian rule after the corruption of past years and democracy. His successor Deng also greatly improved Chinese life, he allowed for private enterprise and special economic zones to be set up. Maybe the single most important reason why democracy has not been introduced to Chinese people is because the average peasant simply does not want democracy, he is happy with his improved life under Deng, and fears the chaos which could take place were China to follow Russia's example of becoming a democracy. Nevertheless there have been resistance to the Chinese Communist Party; Tiananmen Square and Democracy Wall are a classic examples of resistance to the Communist ways, and how Communism dealt with protestors. Despite Deng's economic reforms he stands firm on the one party system run in China. In 1979 After Mao Zedong's death people began to openly debate the political future of China, Democracy Wall formed where bold writers expressed their wishes for freedom and democracy. Deng quickly clamped down on this. Closing the wall to everyone and imprisoning the main writers. The Tiananmen Square massacre was possibly the most famous clamp down on political protests. Deng forcefully used the People Liberation Army to drive the students out of the square killing many as they went. ...read more.

The Iron Rice Bowl will be gone. However the free market system would entice many big businesses not already established in China to enter her markets, creating new and well paid jobs. This isn't a permanent solution however, the Chinese Communist party will find it very difficult to remain popular and with the foreign influence of TV and the Internet, the reminders of democracy will be all to clear, it would only be a matter of time before further protests will occur, and another Tiananmen Square like incidence would create world-wide public outrage. I doubt with the following pressure China would be able to keep its Communist government. So that would make some sort of change inevitable. There highly improbable solution is to revert to Mao Zedong's pure Communist way, have everyone work for each other again, but I doubt any Chinese person would want to return to that after the entices of the big "capitalist" cities. So there remains only one viable option for China to turn in a democratic country. But this too carries risks, will corruption once again work its way into the political parties? Will China's economy collapse like the Russian's? Will people actually turn out and vote of elections? especially the rural dwellers who seem to care little about the political struggles which seem so far away. The only way these questions will be answered is if China changes. Only then will what is right for China be apparent. ...read more.