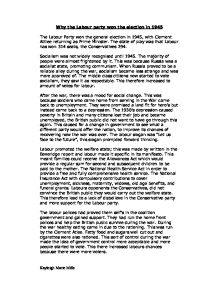 Why the Labour party won the election in 1945

Why the Labour party won the election in 1945 The Labour Party won the general election in 1945, with Clement Attlee returning as Prime Minister. The state of play was that Labour has won 314 seats, the Conservatives 294. Socialism was not widely recognised until 1945. The majority of people were almost frightened by it. This was because Russia was a socialist state, promoting communism. When Russia proved to be a reliable alley during the war, socialism became less strange and was more approved of. The middle class citizens now started to vote socialism, they saw it as respectable. This therefore increased to amount of votes for labour. After the war, there was a mood for social change. This was because soldiers who came home from serving in the War came back to unemployment. They were promised a land fit for hero's but instead came back to a depression. ...read more.

This therefore lead to a lack of disbelieve in the Conservative party and more support for the Labour party. The labour polices had proved them self's in the coalition government and gained support. They had run the home front polices and help the British public survive during the war. During the war healthy eating came in due to the rationing. This was run by the Clement Atlee. Fatty food and sugars well cut out and cigarettes were also rationed. This sort of control during the war made the idea of government control more acceptable and more people started to vote. This there increased labours chances because there were more voters. Even though the conservatives helped Britain to win the war they still had a bad reputation. Their nick name was "Guilty Men". This was because after world war one once Germany had been defeated, Winston Churchill had appeased Hitler. ...read more.

On a radio broadcast Winston Churchill said that if labour came to power it will be like the "Gestapo" in power. This was the internal security police of Nazi Germany. The Nazis established the Gestapo in order to monitor and stamp out any political opposition to the Hitler regime. Under Heinrich Himmler, the Gestapo's powers became brutal and far-reaching in ferreting out Jews, Marxists, and even moderate critics of the regime. By referring the labour party to such a brutal regime it was not approved upon and lost creditability for the conservatives. Overall the actions of Winston Churchill and his decisions through the campaign cost them to loose the election to Labour. I believe that the conservative's ways of campaigning and relying on gratitude from the British public for winning the war, lost them votes. I also believe that by trying to discredit the Labour party also lost them respect, which lost them votes. ?? ?? ?? ?? Kayleigh Marie Mills ...read more.