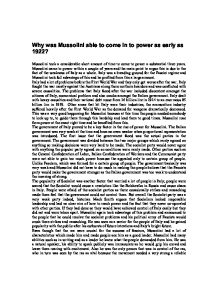 Why was Mussolini able to come in to power as early as 1922?

Why was Mussolini able to come in to power as early as 1922? Mussolini took a considerable short amount of time to come to power a substantial three years. Mussolini came to power within a couple of years and the main point to argue this is due to the fact of the weakness of Italy as a whole. Italy was a breading ground for the Fascist regime and Mussolini took full advantage of this and he profited from this a large amount. Italy had a lot of problems before the First World War and they only got worse after the war. Italy fought the war mostly against the Austrians along there northern boarders and was conflicted with severe causalities. The problems that Italy faced after the war included discontent amongst the citizens of Italy, economical problem and also cracks amongst the Italian government. Italy dealt with heavy casualties and their national debt rouse from 16 billion lire in 1914 to an enormous 85 billion lire in 1919. Other areas that hit Italy were their industries; the ammunition industry suffered heavily after the First World War as the demand for weapons dramatically decreased. ...read more.

The government basically was very weak and Mussolini did not have to do much in making the people believe that the Fascists party would make the government stronger as the Italian government was too weak to understand the meaning of strong. The popularity of Socialist was another factor that worried a lot of people in Italy; people were scared that the Socialist would cause a revolution like the Bolsheviks in Russia and cause chaos in Italy. People were afraid of the socialist parties as there occasionally strikes and ransacking made them feel that the government could not control them. But overall the Socialist party was a very weak party indeed, historian Mack Smith argues that Socialism lacked responsible leadership and had no clear aim of how to reach power and the fact that they never co-operated with other parties. If they had done so they would have achieved control of Italy easily but they did not and were taken apart. Mussolini again took advantage of this problem and announced to the people that he could resolve the socialist problems and his political army of Fascists would crush there strikes and ransacking. ...read more.

As a result he gained a lot of support from the people and it was his first real large step that gave him power before 1922. The fascists were able to gain power in such a short time mainly because Italy was overall an extremely weak country. In only three years fascism came into power with only several seats in parliament, it could have been stopped but a few lucky events proved lucky for Mussolini and handed him power in 1922. He was very lucky at times an example being the March on Rome, Mussolini himself did not expect himself to gain power so easily so worried and was prepared to flee, but still he conquered Rome and was given power easily. If the socialist party had been more organized and co-operative then they might have come to power, but fate played into Mussolini's hands. Although the movement could have been stopped very easily, the weakness of the government to take action against the Fascists gave then success and this was why Mussolini and the Fascist party was able to achieve dominance of Italy. ...read more.