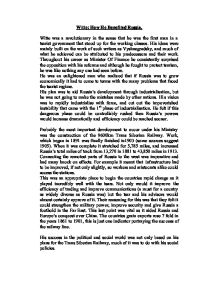 Witte: How He Benefited Russia. Witte was a revolutionary in the sense that he was the first man in a tsarist governmen

Witte: How He Benefited Russia. Witte was a revolutionary in the sense that he was the first man in a tsarist government that stood up for the working classes. His ideas were mainly built on the work of such writers as Vyshnegradsky, and much of what he achieved can be attributed to his predecessors and their work. Throughout his career as Minister Of Finance he consistently surprised the opposition with his reforms and although he fought to protect tsarism, he was like nothing any one had seen before. He was an enlightened man who realised that if Russia was to grow economically it had to come to terms with the many problems that faced the tsarist regime. His plan was to aid Russia's development through industrialisation, but he was not going to make the mistakes made by other nations. His vision was to rapidly industrialise with force, and cut out the impoverished instability that came with the 1st phase of industrialisation. ...read more.

As I have mentioned, Witte recognised the need to relieve the tensions, distress and protest that had historically come with the first stage of industrialisation. To put it simply, the first stage of industrialisation involved putting a lot of finances into the construction of infrastructure and factories. This quite often concerned the accumulation of large debt, and inevitably this meant that less money could be spent on the populace. Unsurprisingly this could lead to political instability as an unhappy populace makes a pressurised and divided government. Therefore, his way to counteract the problems in the foreseeable future was to implement social policies that would improve the quality of many lives. The first of these came in 1882 with the introduction of factory inspectors. These people were assigned to assess the workers conditions and lobby for reform on their part. In the same year he passed laws that placed controls on female and child workers. Both the induction of factory inspectors and worker laws were incredibly effective when trying to win over the public. ...read more.

This kept the Rouble as high and as stable as it could be. If the country had a fluctuating currency then foreign investment would be unlikely, due to the increased risk of losing money. Another policy implemented, another victory for Witte and another step towards a Russia that could truly hold its own in the World Market. By 1914 2000 million Roubles of foreign money had been invested into the country. In conclusion it is safe to say that for a certain period of time, Witte did more for the modernisation of Russia than any one before him. He provided a new perspective on how to govern and dramatically increased efficiency within the country. From 1893 to 1903 iron steel and oil productions tripled and industrial growth was respectable when compared with other European nations. It was even higher than Germany's growth rate, where theirs was 84.2% and Russia's was 96.8%. It is unquestionable in my mind that without Witte's vital contribution the switch from backward, medieval Russia to modern industrialising Russia would have taken years more to come, if at all. Witte had his down sides, but what he did for the people was miraculous. ...read more.