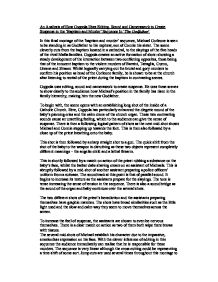 An Analysis of How Coppola Uses Editing, Sound and Camerawork to Create Suspense in the 'Baptism and Murder' Sequence In 'The Godfather'.

An Analysis of How Coppola Uses Editing, Sound and Camerawork to Create Suspense in the 'Baptism and Murder' Sequence In 'The Godfather' In this final montage of the 'baptism and murder' sequence, Michael Corleone is seen to be standing in as Godfather to his nephew, son of Connie his sister. The scene cleverly cuts from the baptism located in a cathedral, to the slayings of the five heads of the rival Mafia families. Coppola creates an active formation of shots: showing a steady development of the interaction between two conflicting opposites, those being that of the innocent baptism to the violent murders of Barzini, Tattaglia, Cueno, Greene and Stracci. Whilst logically carrying out the brutal and gory murders to confirm his position as head of the Corleone family, he is shown to be at the church altar listening to recital of the priest during the baptism in contrasting scenes. Coppola uses editing, sound and camerawork to create suspense. ...read more.

The two different shots of the priest's benediction and the assistants preparing themselves have graphic matches. The shots have broad similarities such as the little light used and the slow and calm way they seem to move themselves across the screen. To increase the feel of suspense, the assistants are shown to even be nervous themselves. There is a clear match on action as two of them both wipe there brows with tissues. The several mid-shots of Michael establish his character due to the impassive, emotionless expression on his face. With the clever inference of editing in this sequence the audience immediately can realise that he is responsible for these murders. The sequence is very linear although the cross cutting could be representing a time shift of some sort. Jump cuts are used several times throughout this montage to show two juxtaposed events, the baptism and murders. They create a sense of disorientation and confusion, causing the audience to feel even more unsettled. ...read more.

This alone could cause an anxious feeling within the audience. Low key lighting is used throughout this sequence. This forms a large amount of shadows around the characters and there settings, making the audience restless and feeling uneasy. The final shot shows another mid-shot of Michael as the baptism has been completed as has his murders. There is a high degree of closure at the end of this sequence when referring to Michaels place in the family being clear - he is now the new Godfather. Consequently, Coppola has presented the natural challenge faced by Michael in his new dual life using a variety of binary opposites and film techniques. While he speaks in one way in one world (with the blessing of the child and his affirmation before Christ), he acts in a completely contradictory way in another world (by ordering the murder of the head of every rival family). In this montage, Coppola edits two worlds together in an extraordinary style. ...read more.