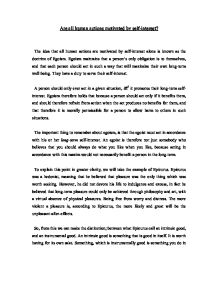 Are all human actions motivated by self-interest?

Are all human actions motivated by self-interest? The idea that all human actions are motivated by self-interest alone is known as the doctrine of Egoism. Egoism maintains that a person's only obligation is to themselves, and that each person should act in such a way that will maximize their own long-term well being. They have a duty to serve their self-interest. A person should only ever act in a given situation, iff1 it promotes their long-term self-interest. Egoism therefore holds that because a person should act only if it benefits them, and should therefore refrain from action when the act produces no benefits for them, and that therefore it is morally permissible for a person to allow harm to others in such situations. The important thing to remember about egoism, is that the egoist must act in accordance with his or her long-term self-interest. An egoist is therefore not just somebody who believes that you should always do what you like when you like, because acting in accordance with this maxim would not necessarily benefit a person in the long-term. To explain this point in greater clarity, we will take the example of Epicurus. Epicurus was a hedonist, meaning that he believed that pleasure was the only thing which was worth seeking. However, he did not devote his life to indulgence and excess, in fact he believed that long-term pleasure could only be achieved through philosophy and art, with a virtual absence of physical pleasures. Being free from worry and distress. ...read more.

Of course, although this is seen as one of the most damning of the criticisms, I personally believe it to be unfair. We cannot place our trust in science, but decide to disregard this theory on such grounds. If anybody truly believes that such things do not conform to past observation, then it is only these people who can ever be justified in discounting Psychological egoism with this argument - the rest of us must find another path. Even the problem of induction itself has its own problems, and philosophical discussion since Hume founded the inductive problem, has revealed many ways to get around the problem, even if non of these will ever completely eradicate the issues brought to bear by this problem. But to start reciting these arguments now, would be to become weighed down in dogma, so I will move on. It is just important that we remember that such a critique cannot be so damning, if it is damnable itself. Another problem comes from the problem of other minds. If we take the example of a doctor who risks his life running a leper colony, we may be able to say that he is doing it because he couldn't live with himself if he denied his Hippocratic oath, but how can we be certain? After all, we have no special insight into his own mind greater than that which he has himself - and he himself claims to be acting with no self-interest. ...read more.

By following this way of thinking, then situations occur were you must claim that all people should look after themselves, even if this results in the person not looking after themselves. I will explain further: if john and I both have a fatal disease, which can be treated, only with a vaccine, of which there exists only enough for one dose, then I must not only attempt to get the vaccine for myself, but also recommend, should I be asked, that John do the same. However, if I complied with the later action I would clearly not be serving my best interests if I did this. Kurt Baier developed this critique of ethical egoism, concluding that ethical egoism cannot decide in cases of conflicting interests, and such cases are what any ethical system seeks to decide, as, when there is no conflict of interests ethical discussion becomes arbitrary. Ethical egoism is therefore invalid as an ethical system. "...morality is designed to apply... where interests conflict.4" Having a system of morality that is based on self-interest cannot provide any consistency, as morality would fluctuate from person to person, and as such, ethical egoism is at the very least a tenuous and incomplete moral system. And as such I would have to say that the theory of psychological egoism, although not accepted by the greater body of modern philosophers, and although its premises seem intuitively repugnant, is the more accurate view of human morality. 1 Iff = logical statement meaning: "if an only if." 2 Many thanks to Hume on this one 3 Leviathan 4 Kurt Baier ...read more.