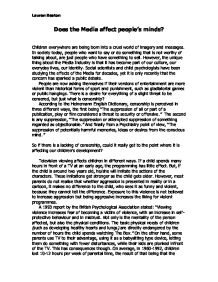 Are children affected by Media?

Does the Media affect people's minds? Children everywhere are being born into a cruel world of imagery and messages. In society today, people who want to say or do something that is not worthy of talking about, are just people who have something to sell. However, the unique thing about the Media Industry is that it has become part of our culture, our everyday lives, our identity. Social scientists and child psychologists have been studying the effects of the Media for decades, yet it is only recently that the concern has sparked a public debate. People are now asking themselves if their versions of entertainment are more violent than historical forms of sport and punishment, such as gladiatorial games or public hangings. There is a desire for everything of a slight threat to be censored, but just what is censorship? According to the Heinemann English Dictionary, censorship is perceived in three different ways, the first being "The suppression of all or part of a publication, play or film considered a threat to security or offensive." ...read more.

By the time a child is in their First Year in Secondary School, they will have watched (on average) 3-4000 hours of broadcast TV alone. Even more astonishing is that they are likely to have witnessed around 8000 murders, and more than 100,000 acts of violence. As technology improves, it seems that the amount of violence in entertainment is increasing, and imagery is more and more graphic, resulting in a more realistic portrayal of violence. If a swear is said on television it is normal as long as it is said after the 9pm watershed, but if it was said around 30 years ago, it would be a different story. If a child plays video games that portray a graphic image of violence, it will affect their ability to understand and decipher situations. Before the age of 8, a child is most likely to interpret situations based on the obvious face value. When violent actions are either rewarded or not punished, which is the case with electronic gaming, the probability of imitation of the behaviour increases. ...read more.

Although there has always been crime and violence through children's TV, never have there been such serious extreme acts made by children, until recently. One very well known instance is the brutal death of James Bulger. The movie Child's Play 3 was under debate when two 10-year-old boys tormented and murdered the child. The film was then criticised after Suzanne Capper was kidnapped, tortured and set on fire, as the group of young people chanted, " I am Chucky, wanna play?" Never before have children been targeted as a lucrative market for entertainment, violence and sex (however innocent the material is). If you turn on your TV, you open the doors of violence, sex and the tough aspects of reality into your living room, or worse, your child's bedroom. The 19th and 20th centuries were teeming with murder and mystery, yet when violence involves people against people, it challenges the audience's ideas around the topic of the effects of Media violence on children and young adults, resulting in us challenging our instinctive denial of our earliest thoughts of fear and aggression. Lauren Beaton ...read more.