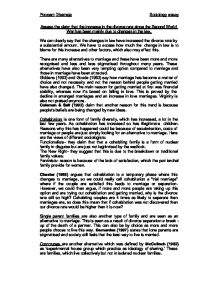 Assess the claim that the increase in the divorce rate since the Second World War has been mainly due to changes in the law.

Assess the claim that the increase in the divorce rate since the Second World War has been mainly due to changes in the law. We can clearly say that the changes in law have increased the divorce rate by a substantial amount. We have to access how much the change in law is to blame for this increase and other factors, which also may affect this. There are many alternatives to marriage and these have been more and more recognised and less and less stigmatised throughout many years. These alternatives have also been very tempting option compared to marriage and those in marriage have been attracted. Giddens (1993) and Goode (1963) say how marriage has become a matter of choice and not necessity and not the reason behind people getting married have also changed. The main reason for getting married at first was financial stability, whereas now it's based on falling in love. This is proved by the decline in arranged marriages and an increase in love marriages. Virginity is also not praised anymore. Coleman & Salt (1992) claim that another reason for this trend is because people's beliefs are being changed by new ideas. ...read more.

One that is EXPECTED by the husband and the other by the wife. This difference in expectations does often cause divorce; therefore we cannot blame the change in laws for being the only culprit. Fletcher outlines the economic changes and how they have affected women as they are now able to leave empty shell marriages whereas if they were not financially stable, this would not be a possibility. Although women and men are said to be "equal" in the world or work, womens average earnings are still 75% less then men's earnings. As women still have to work at home, take care of children, they usually take up part time of shorter hours. Women are also changing their atitutes towarde family, and do tend to question themselves before doing anything, whereas usually they used to see this as a duty. Hart (1976) claims that the clash between household duties and outside work causes conflict between the spouses and if the situation is not handled with care, could end in divorce. Before the Divorce Legislation Act of 1971, for a divorce it had to be proved that one of the partners was wrong and then there was a possibility of a divorce. ...read more.

Anderson (1983) outlined this. Remarriage after the death of the spouse was common so maybe the longer time, which the marriage lasts, is the reason why people get married. Many people see cohabitation as a trial marriage and if things work, they later get married, however the General Households Survey 1993 would disagree with this as they claim that those who have been in cohabiting relationships are more likely to get divorced. These did have many younger couples and these young couples have been blamed for the high divorce rates. The family is now becoming mire privatised and help from the wider kin is less common. Family members only rely on the people in their respective family. This can lead to the intensity within the family to increase. When trouble arises in the family, the people then are reluctant to go to their wider kin for help and men do generally hesitate to get professional help so the situation worsens and may lead to divorce. This tends to agree with Young and Willmott's theory (stage 3) We have now seen many reasons why couple divorce and could be because of the changes in law but we can't ignore the fact that there are many other reasons involved. Poonam Dhameja Sociology essay ...read more.