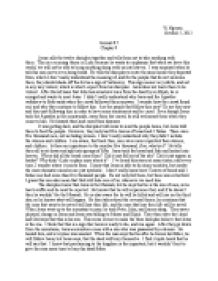 Bible commentary on the miracle of the loaves and fishes

﻿Vi Nguyen October 5, 2012 Journal # 5 Chapter 9 Jesus calls the twelve disciples together and tells them not to take anything with them. This is a recurring theme in Luke because he wants to emphasize that when we leave this world, we will not be able to bring anything along with us into heaven. I was surprised when he told his men not to even bring bread. He tells the disciples to enter the same house they departed from, which I don?t really understand the meaning of, and for the people that do not welcome them, they should shake off the dirt as a sign of testimony. This sign seems very subtle, and not in any way violent, which is what I expect from his disciples. Jesus does not teach them to be violent. After Herod hears that John has somehow risen from the dead by an Elijah, he is enraged and wants to meet Jesus. I didn?t really understand why Jesus and the Apostles withdrew to Beth-saida when the crowd followed them anyway. I wonder how the crowd found out, and why they continue to follow him. Are the people that follow him new? Or are they new and they just following him in order to have some amusement and be cured. Even though Jesus took the Apostles in the countryside, away from the crowd, he still welcomed them when they came to him. ...read more.

Chapter 10 Every time I read about a quantity that relates to Jesus, I assume there is an importance behind that number, so the number seventy must be significant in some way. Jesus sets out seventy of his people, but I wonder where he got so many people to leave their homes and just follow him. They must be a bunch of young single men, and a few single women because how would the people that have families be able to do this. Jesus talks about the many many people that can be ?harvested? but not enough labors. I find it somewhat weird how Jesus always uses references to farmers. Is it because he wants to relate everything back to the people so that they will be able to understand what he says better? The people back then probably didn?t have a lot of education so Jesus wanted to put it in simpler terms so that it doesn?t restrict only to the educated people. Jesus also refers to the lamb as his people and the wolf as the people that they will soon encounter. It shows that Jesus is aware of the dangerous people that will arise after they hear about him, and how many followers he has. I wonder why Jesus tells them not to bring anything though, why does it matter? I?m confused about the part where Jesus talks about peace; he says that if the people share in peace, then labor?s peace will rest on them, and if not, it will return. ...read more.

Job 28:21, 23 says that while wisdom ?is hidden from the eyes of living things? God understands the way to it and he alone knows where it dwells.? This proves that Jesus is the true son of God because only when he is the son of God, can he be able to have that intimate relationship. It also proves to me that Jesus and God are not of one person. ?The Levites were the descendants of Levi, one of the twelve sons of Jacob. Unlike the other tribes of Israel, they were not given a tribal allotment in the land but rather consecrated as God?s special tribe in place of the first born Israelites. Their role was to assist the priests in the service of the Tabernacle and later the Temple.? The Levites is the only tribe that had this special advantage, and I wonder why they were the only ones. ?Jesus is not suggesting that salvation is by works. Rather, authentic acts of love arise form an attitude of faith. Through this parable, Jesus will expose the man?s failure to truly love his neighbor.? ?Jewish society placed a high value on hospitality, and a woman?s honor and reputation depended on her ability to manage her household well. Since service was a woman?s highest calling, Martha?s complaint against Mary would be legitimate?Jesus shatters cultural expectations by affirming the woman as a disciple.? I still don?t understand why Martha would be doing the right thing if their main job is to be hospitable to their guests. ...read more.