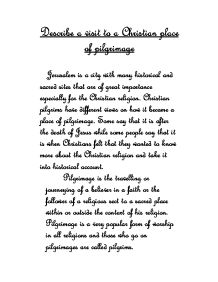 Christian places of Pilgrimage - The room of the last supper

Describe a visit to a Christian place of pilgrimage Jerusalem is a city with many historical and sacred sites that are of great importance especially for the Christian religion. Christian pilgrims have different views on how it became a place of pilgrimage. Some say that it is after the death of Jesus while some people say that it is when Christians felt that they wanted to know more about the Christian religion and take it into historical account. Pilgrimage is the travelling or journeying of a believer in a faith or the follower of a religious sect to a sacred place within or outside the context of his religion. Pilgrimage is a very popular form of worship in all religions and those who go on pilgrimages are called pilgrims. Many religions go on pilgrimage but we are going to centralise this discussion on the holy sites in Jerusalem. ...read more.

Across the street was were Jesus was stripped of his clothes, whipped and forced to wear the crown of thorns and the robe of royal purple. Then Pilate declared to the crowd 'behold the man' and Jesus started his final journey up the Via Dolorosa. The Holy Sepulchre The Holy Sepulchre from my understanding means the 'sacred tomb' Several Sects share the Holy Sepulchre church- Greek, orthodox, Roman Catholics, Armenian, Syrian Coptic and Abyssinians. The Church is set on the hill of Golgotha, literally known as the skull hill. It is called Calvary on the Latin translation and legend has it that Adam's skull was buried there. Just inside the entrance is the stone of unction, where Jesus was buried after being taken down from the cross. In the high domed rotunda is the Holy Sepulchre. Every Friday afternoon, there is a procession along the Via Dolorosa to the churches of the Holy Sepulchre. ...read more.

But in ancient time, it was known as hameshina, the mount of anointing. This beautiful sacred place was a place of worship during the time of king David. Sacrifices were very much offered here. It is also believed Christ ascended into heaven from here. A few stops further from here is the church of pater noster (the lord's prayer). The Lord's Prayer is set into the tiled walls with 44 different languages. Some general sites Over looking lower Galilee are three sites sacred to Christian pilgrims. Nazareth, mount Cana and mount tabor. On the northern shores of the lake facing Tiberius, Christ preached there to the crowds and many miracles happened there. Today, you can see mount beatitudes which, is on the beautiful hilltop, tabha, migdal, and Capernaum. These places mentioned are some of the basic pilgrimage sites in Jerusalem. These pilgrims don't go to these places just for vacation but they go with many different and personal reasons and they come back home satisfied with the choice they have made.... ...read more.