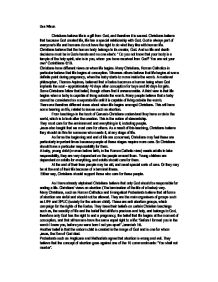 Lisa Wilson Christians believe life is a gift from God, and therefore it is sacred. Christians believe that because God created life, life has a special relationship with God. God is always part of everyone's life and humans do not have the right to do what they like with human life. Christians believe that the human body belongs to its creator, God. And so life and death decisions must be in Gods hands and no one else's: " Do you not know that your body is a temple of the holy spirit, who is in you, whom you have received from God? You are not your own" Corinthians 6:19. Christians have different views on when life begins. Many Christians, Roman Catholics in particular believe that life begins at conception. Whereas others believe that life begins at some definite point during pregnancy, when the baby starts to move inside the womb. A medieval philosopher, Thomas Aquinas, believed that a foetus becomes a human being when God implants the soul - approximately 40 days after conception for boys and 90 days for girls. Some Christians follow that belief, though others find it unreasonable. A third view is that life begins when a baby is capable of living outside the womb. Many people believe that a baby cannot be considered as a separate life until it is capable of living outside the womb. ...read more.

They would allow abortion where the life of the mother is threatened. Some would also allow a termination for social reasons, such as poverty and the effects on the rest of the family. Christians who look at individual circumstances base their views on the following Christian teachings. Jesus told his followers to love their neighbour as themselves, and abortion may be the most loving thing. The sanctity of life can be broken in other ways, not simply by abortion. Christianity is concerned with justice and it would be unjust to ban abortions because it would affect the poor more than the rich, because the rich would still be able to buy abortions. As we can see Christians hold similar views that abortion is sinful and wrong, but some believe that in certain circumstance, it is the lesser of the two evils. All Christians see babies as a gift from God. All Christians agree that Euthanasia as such, is wrong. They believe life is a gift given by God, and only God can take life away. Human life is a gift from God and it is the duty of Christians to preserve life and to improve life. Euthanasia is the action of inducing a quiet and easy death. The law in Britain does not allow anyone to end another person's life either by giving drugs or by switching off a machine, even if the person requests it. ...read more.

The concept of life holds many different beliefs, some of which may be quite unrealistic for some Christians to believe. One example of this is the belief that life begins at some definite point during pregnancy, when God implants the soul into the foetus, 90 days after conception for girls and 40 days for boys. Some people find this hard to believe, they put forward an argument of how do we know that the soul is implanted after those specific days. Yet some still believe this idea. Christians believe that when someone dies it is God who has called them and he is the only person who has the power to end a life. However, a non-Christian who is going through the heartache of losing someone close to them, may not agree with this belief, and may think that there cannot possibly be a God to have let that happen. So they would find it very difficult to take on the belief that everyone dies for a reason. I believe that everyone should be able to say how they, feel and what they believe in. But they should also allow others to decide what they want to believe in and not try to influence them, as it may offend them. In reference to the original statement, I think that all individuals, Christian or non-Christian should believe what they feel is right about life, and should not try to make others accept their positions. ...read more.