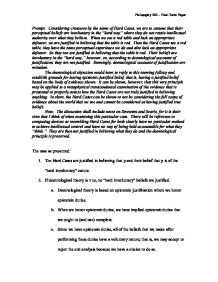 Considering creatures by the name of Hard Cases, we are to assume that their perceptual beliefs are involuntary in the &quot;hard way&quot; where they do not retain intellectual authority over what they believe.

Prompt: Considering creatures by the name of Hard Cases, we are to assume that their perceptual beliefs are involuntary in the "hard way" where they do not retain intellectual authority over what they believe. When we see a red table and lack an appropriate defeater, we are justified in believing that the table is red. Then the Hard Cases see a red table, they have the same perceptual experience we do and also lack an appropriate defeater. So they too are justified in believing that the table is red. Their beliefs are involuntary in the "hard way," however, so, according to deontological accounts of justification, they are not justified. Seemingly, deontological accounts of justification are mistaken. The deontological objection would have to reply to this seeming fallacy and establish grounds for having epistemic justified belief, that is, having a justified belief based on the body of evidence shown. It can be shown, however, that this very principle may be applied to a metaphysical transcendental examination of the evidence that is presented to properly assess how the Hard Cases are not truly justified in believing anything. In short, the Hard Cases can be shown to not be considering the full scope of evidence about the world that we see and cannot be considered as having justified true beliefs. Note: The discussion shall include notes on Strawson and Searle, for it is their view that I think of when examining this particular case. There will be reference to computing devices as resembling Hard Cases for both clearly have no particular method to achieve intellectual control and have no way of being held accountable for what they "think." They are then not justified in believing what they do and the deontological principle is preserved. The case as presented: 1. The Hard Cases are justified in believing that p and their belief that p is of the "hard involuntary" nature. ...read more.

I can, however, say that I saw a pen at X time on Y date in an A fashion. However, I cannot say that I saw the pen the way that Peter Markie, Ph.D. has seen it because I am not you. We cannot have the same sensory experience and evidence because both of these are modified and described in terms of how we individually experience things. If we are not having the exact same experience, then we cannot have the exact same evidence. Evidentiary claims found their basis on experiential claims. One cannot be justified in the belief that there is evidence for a pen in front us without going through the proper experience to make such a claim. So, in this fashion, even though we are two different people, the above tautology applies to our situation because we seemingly have nothing to refute the world that we live in. We are in voluntary control of our intellectual processes and as such, our freedom allows us to say that we may have the same experience, but the evidence would be equivalent, not the same. Since our perceptual stance isn't good enough to distinguish between the two, we can get away with saying that our evidence is the same. Since this is apparent, it is of even more importance to note that Hard Cases may go through this exact same process that you and I may go through. A Hard Case and I may both see a chair and we could go through the preceding argument again. In this case, there is a distinct difference. The Hard Cases are not like us. They have no likeness to compare to us because we are beings that have the ability to discern whether or not we have voluntary or involuntary control of our intellectual processes. This is part of our description of mental processes. We surely can tell whether or not one is in capacity to have voluntary intellectual activity and because of this, we can immediately point out that Hard Cases do not have the same voluntary epistemic processes we do. ...read more.

in specific versus Hard Cases, we can assess nearly every infinite regress objection as a moot point. We know that Hard Cases do not see the world the way we do and because of this, they are not justified in their beliefs. We can see that Hard Cases have a set of evidence that they are in effect ignoring; they are not being proper epistemic inquirers by deontologists' standards, although they are not at fault for this. However, because they are in effect missing information that they could possibly use to perhaps change their "involuntary beliefs" in the soft involuntary sense, they are not justified in believing what they do. This would be the best deontological reply and as such, it would work only on a limited scale. There would be a lot of debate as to whether or not one's likeness is actually transferable and because of this, there wouldn't be necessarily any agreement outright. On the other hand, this seems to provide the absolute best solution to preserve deontological theory and serves a very important function in helping us discern what is evidence and experience really mean to us. I think that this reply is successful on many grounds. It helps to preserve deontological theory, it helps to distinguish between people that are phenomenologically stuck on one evidentiary platform from those that can discern between the best evidence available, it helps to lay out a foundation for the definition of "same." On these grounds, success is defined by the absolute refutation of the attack on deontological theory and preserves the notion of voluntary belief while also helping to account for those involuntary beliefs (soft involuntary) that we are allowed to access through our epistemic duty. 1 The Problem of Consciousness. J. Searle. 2 Ibid 3 Ibid 4 Ibid 5 Ibid 6 Minds, Brains and Science. J. Searle. 7 Ibid. 8 The Problem of Consciousness. J. Searle. 9 Ibid. 10 Ibid. 11 Ibid. Philosophy 302 - Final Term Paper ...read more.