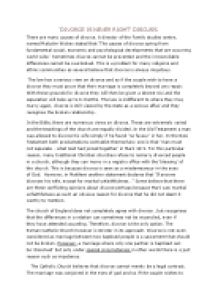 ﻿?DIVORCE IS NEVER RIGHT? DISCUSS. There are many causes of divorce. A director of the Family studies centre, named Malcolm Wickes stated that ?The causes of divorce spring from fundamental social, economic and psychological developments that are occurring world wide.? Sometimes divorce cannot be prevented and the irreconcilable differences cannot be overlooked. This is a problem for many religions and ethnic communities as several believe that divorce is always iniquitous. The law has a serious view on divorce and so if the couple wish to have a divorce they must prove that their marriage is completely beyond any repair. With these grounds for divorce they will then be given a decree nisi and the separation will take up to 6 months. The law is indifferent to where they may marry again, divorce is still viewed by the state as a serious affair and they recognise the broken relationship. In the Bible, there are numerous views on divorce. These are extremely varied and the teachings of the church are equally divided. In the Old Testament a man was allowed to divorce his wife simply if he found ?no favour? in her. ...read more.

Otherwise, if they decide to remarry in any other way they would have committed adultery in the eyes of the Catholic Church and God. In addition there is also the condemnation of adultery in the Bible expressed by the quote:"A man can hire a prostitute for the price of a loaf of bread, but adultery will cost his all he has." Jesus agreed with this as he stated in matthew 5:28 that "everyone who looks at a woman lustfully has already committed adultery with her in his heart." Therefore the breaking of a marriage bond is never right when adultery is concerned. Subsequently, there are more conflicts of opinion for example in Genesis 2:24 the Bible states ?[a husband] cleaved to his wife and become one flesh.? This is demonstrating the belief that the marriage relationship should be eternal and the love should be immutable (as embodied by the ring in the marriage service.) Pope John Paul once said that marriage is an ?unbreakable alliance? and not just a ?passing emotion? but a ?free decision to bind oneself completely in the good times and the bad to one?s partner. ...read more.

Divorce may be seen as a declaration that the amalgamtion of two people via marriage does not have any significance as is can be easily dismissed by the means of divorce. In conclusion, I believe that divorce can be right in particular circumstances. However, different faiths and ethnic groups all have their own outlook on divorce. Divorce is regarded as a highly controversial subject within christianity. However, the Quaker faith and The Church of England is perhaps more lenient in their allowance of divorce as they perhaps recognise the necessity of the joining and separation of a relationship. However a Catholic Church regards divorce as a sacrament that is forbidden to be broken, unless annulled and therefore the couple is declaring full ignorance to whether the marriage ever existed. Personally, it is my belief that love and marriage should be eternal ('till death do us part.') By breaking this sacred bond you are initially implying that you did not fully commit and that the symbolic acts performed in the marriage service had no physical and emotional effect on you. However, if there is a just reason for the marriage to be annulled and the irreconcilable difference cannot be overlooked than there is a just cause for divorce. ...read more.