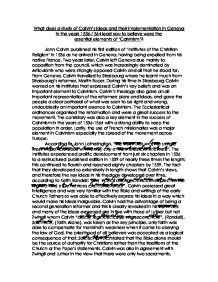 What does a study of Calvin's ideas and their implementation in Geneva in the years 1536-1564 lead you to believe were the essential elements of 'Calvinism'? John Calvin published his first edition of 'Institutes of the Christian Religion' in 1536 as he arrived in Geneva, having being expelled from his native France. Two years later, Calvin left Geneva due mainly to opposition from the council, which was increasingly dominated by Articulants who were strongly opposed Calvin and all that he stood for. From Geneva, Calvin travelled to Strasbourg where he learnt much from Strasbourg's reformer, Martin Bucer. During his time in Strasbourg Calvin worked on his institutes that expressed Calvin's key beliefs and was an important element to Calvinism. Calvin's theology also gave an all important representation of the reformers plans and ideas, and gave the people a clear portrayal of what was seen to be right and wrong, undoubtedly an important essence to Calvinism. The Ecclesiastical ordinances organised the reformation and were a great success to the movement. The consistory was also a key element in the success of Calvinism in the years of 1536-1564 with a strong ability to keep the population in order. ...read more.

The four books were The Knowledge of God and the Creator, The Knowledge of God the Redeemer in Christ, on the manner of receiving the grace of Christ and on the outward means by which god invites us into the fellowship of Christ. In his first book Calvin outlined his ideas about God, such as the ideas that God is omnipotent and omniscient. In his second Calvin explored sin, an important factor as Calvin perceived much of the Genevan population as "particularly unspiritual", (Randall). This book also gave the Genevan's security as made clear that if they knew the 'real truth' (Calvinism) they would go to heaven. This book therefore gave to the Genevan's in Calvinism and in turn support to Calvin. The third book outlined Calvin's ideas about the holy spirit belonging only to believers hearts and that God chooses who will have eternal life and who will be condemned, these ideas would have an important role in keeping control over the people and affecting their actions. The book would encourage citizens to behave if it makes clear that god has a decision over who goes to heaven and who goes to hell, it would also encourage people to embrace Calvinism if they wished to possess the Holy Spirit. ...read more.

The Institutes outlined the theology of Calvinism which gave a clear insight into Protestantism and the ideas behind it. Calvin's theology enabled the Genevan people to understand what they should believe in terms of religion and morality, i.e. what is right and what is wrong. The fact that Genevan's were clear on what they should believe in terms of religion, i.e. the Eucharist meant that the ideas could successfully spread. The Ecclesiastical Ordinances helped to give a strong sense of structure and organisation to the reformation and Calvinism itself. They also led the way for the Church and authorities to work together which would prove to be a crucial element in the success of Calvinism. The Consistory was also an essential element in Calvinism as it imposed strict moral and social regulation s on the Genevan population to keep order and maximise control. The Consistory also ensured that the citizens kept to the religion as they should, the people of Geneva could do little to resist the Consistory and could in turn do little to resist the spread of Calvinism. Finally the use of French missionaries was a strong element in the dispersal of Calvin's ideas across Geneva as well as the rest of Europe, without the missionaries spreading Calvin's words it is very doubtful that Calvinism would have grown as successfully as it did. ...read more.