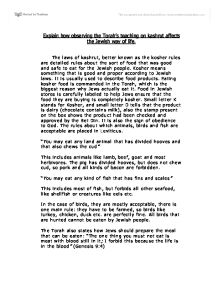 Explain how observing the Torahs teaching on kashrut affects the Jewish way of life.

Explain how observing the Torah's teaching on kashrut affects the Jewish way of life. The laws of kashrut, better known as the kosher rules are detailed rules about the sort of food that was good and safe to eat for the Jewish people. Kosher means something that is good and proper according to Jewish laws. It is usually used to describe food products. Eating kosher food is commanded in the Torah, which is the biggest reason why Jews actually eat it. Food in Jewish stores is carefully labeled to help Jews ensure that the food they are buying is completely kosher. Small letter K stands for Kosher, and small letter D tells that the product is dairy (chocolate contains milk), also the stamp present on the box shows the product had been checked and approved by the Bet Din. ...read more.

In the case of birds, they are mostly acceptable, there is one main rule: they have to be farmed, so birds like turkey, chicken, duck etc. are perfectly fine. All birds that are hunted cannot be eaten by Jewish people. The Torah also states how Jews should prepare the meal that can be eaten: "The one thing you must not eat is meat with blood still in it; I forbid this because the life is in the blood" (Genesis 9:4) Jewish people can eat only animals that are killed in "kosher" way. That means in a ritual manner called shechitah. Only a shochet, a licensed Jewish butcher trained in the kosher method of slaughter is permitted to kill an animal. ...read more.

When meat is to be cooked and eaten for dinner, than all products involving milk cannot be eaten even as a part of the sweet course. Cheese cannot be substituted either, because it also contains milk, but a fruit course would be acceptable. Orthodox Jews take great care to ensure there is no accidental mixing of meat and milk in the preparation. They have two separate areas in their kitchen, one to prepare and wash-up meat dishes, the other for preparation of dishes involving milk. There is one sink, cupboards and utensils (with red handles) for meat, and with blue handles for milk products. Reform Jews vary in how strictly they keep the kosher rules. Some may eat kosher food but do not necessarily have separated kitchen. Most Jews would argue that family life is at the heart of their religion. ...read more.