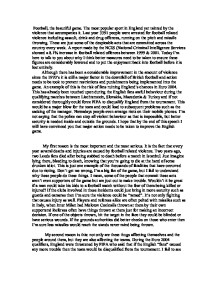 Football, the beautiful game - The mostpopular sport in England yet tainted by the violence that accompanies it.

Football, the beautiful game. The most popular sport in England yet tainted by the violence that accompanies it. Last year 3391 people were arrested for football related violence including assault, drink and drug offences, running on the pitch and missile throwing. These are just some of the despicable acts that are committed across the country every week. A report made by the NCIS (National Criminal Intelligence Services showed a 8.1% increase in football related offences between 1999 & 2001. Today I'm here to talk to you about why I think better measures need to be taken to ensure these figures are considerably lowered and to put the enjoyment back into football before it is lost entirely. Although there has been a considerable improvement in the amount of violence since the 1970's it is still a major factor in the downfall of British football and action needs to be took to prevent restrictions and punishments being implemented into the game. ...read more.

Wouldn't it be great if a man could take his kids to a football match without the fear of them being killed or injured? If the clubs involved in these incidents could just bring in more security such as guards and cameras then I'm sure the violence could be "tamed". It's not only fighting that causes injury as well. Players and referees alike are often pelted with missiles such as in Italy, when Inter Milan had Molotov Cocktails thrown at them by their own supporters! Referees often have things thrown at them just for making an incorrect decision. If one of the objects thrown, hit the target in the face they could be blinded or have serious wounds. If the grounds authorities did better checks on those who enter then I'm sure less missiles would reach the stands never mind being thrown. My second reason is this: not only are these thugs affecting themselves and the people around them, but they are also affecting the teams. ...read more.

I know that racism can never be got rid of in the crowds, but I think that the organisations in charge of the matches should take serious actions against players that make racist remarks. Take the England Vs Turkey match for example. An English player (Darius Vassel) ran into the tunnel at half time and struck out at a Turkish player who had uttered something racist whilst on the pitch. Although I do not condone his actions, I do think that the English player was right in not tolerating the verbal abuse. Overall I think that if these factors are thoroughly considered and action is taken then the game will become more enjoyable and will grow even more in popularity. Just take the Rugby World Cup as an example. The English fans behaved impeccably and there were no reports of any trouble whatsoever. "The English Disease", as football violence is known, can never be destroyed but it can be quarantined. I just hope that the authorities and the criminals involved, listen to what is being said and help give English football a good reputation. Thank you for your time. ...read more.