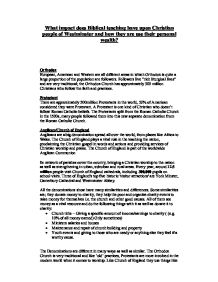 Impact of biblical teaching on use of personal wealth

What impact does Biblical teaching have upon Christian people of Westminster and how they are use their personal wealth? Orthodox European, American and Western are all different areas in which Orthodox is quite a large proportion of the population are followers. Followers live "rich liturgical lives" and are very traditional; the Orthodox Church has approximately 300 million Christians who follow the faith and practices. Protestant There are approximately 500million Protestants in the world, 53% of American considered they were Protestant. A Protestant is one kind of Christian who doesn't follow Roman Catholic beliefs. The Protestants split from the Roman Catholic Church in the 1500s, many people followed them into this new separate denomination from the Roman Catholic Church. ...read more.

Every year, around 12.5 million people visit Church of England cathedrals, including 300,000 pupils on school visits. Three of England's top five historic 'visitor attractions' are York Minster, Canterbury Cathedral and Westminster Abbey. All the denominations show have many similarities and differences. Some similarities are; they donate money to charity, they help the poor and organize charity events to raise money for themselves i.e. the church and other good causes. All of them see money as a vital resource and do the following things with it as well as donate it to charity: * Church tithe - Giving a specific amount of income/earnings to charity ( (e.g. 10% of all money earned) ...read more.

All are very charitable, but try and keep as much as they can so they can make improvements to their churches and buildings are a good example. The Church of England makes the connection between its teachings and the way they use their money by preaching to people about money. Usually it's a good thing but it can get the better of you. As the saying goes "money is the route of all evil" They try and encourage people to give to the church of charities, they help to encourage this by saying it will make you feel much better about yourself. The bible teaches lots of things, it is very informative and helps people understand what the perfect role model is like. ?? ?? ?? ?? ...read more.