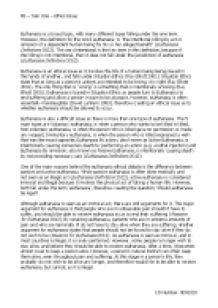 ﻿RE ? Task One ? Ethics Essay Euthanasia is a broad topic, with many different types falling under the one term. However, the definition for the word 'euthanasia' is ?the intentional killing by act or omission of a dependent human being for his or her alleged benefit? (Euthanasia Definitions 2012). The word intentional is the key term in this definition, because if the killing is not intentional, then it does not fall under the jurisdiction of euthanasia (Euthanasia Definitions 2012). Euthanasia is an ethical issue as it involves the life of a human being being placed in the hands of another, and falls under Situation Ethics (Ray Elliott 2001). Situation Ethics state that as long as a person's actions are intended to be loving, it is right (Ray Elliott 2001). The only thing that is ?wrong? is something that is intentionally unloving (Ray Elliott 2001). Euthanasia is based in Situation Ethics as people turn to Euthanasia to end suffering and allow a person in pain to be at peace. However, euthanasia is often essentially manslaughter (David Lanham 1993), therefore creating an ethical issue as to whether euthanasia should be allowed to occur. Euthanasia is also a difficult issue as there is more than one type of euthanasia. ...read more.

However, there are more arguments against euthanasia, as most people see it's immorality to be too overwhelming to overlook. One of the major arguments against euthanasia states that there is a great possibility that euthanasia wouldn't be localised to terminally ill patients (Arguments against Euthanasia 2012). This argument states that if euthanasia became legal, then people who are not terminally ill, like those who suffer from depression or who are ill but not terminally so, will use euthanasia to commit suicide. As euthanasia is the killing of a human being for their alleged benefit, this opposes the definition. The best thing for a depressed or suicidal person isn't death, as they may believe, but instead it is getting help from a medical professional. However, if euthanasia became legal, suicidal people would take advantage of the ability to die quickly and use euthanasia. Another important argument states that euthanasia is a rejection of value and importance of human life (Arguments against Euthanasia 2012). This argument is based on the fact that a human life is sacred, and only in the most desperate of times, as through self-defence, should a human life be deliberately taken. The self-defence argument is justified by stating that although a human life is been taken, it is to save the life of another, the person being attacked. ...read more.

Sick or handicapped persons should be helped to lead lives as normal as possible. Whatever its motives and means, direct euthanasia consists in putting an end to the lives of handicapped, sick, or dying persons. It is morally unacceptable. Thus an act or omission which, of itself or by intention, causes death in order to eliminate suffering constitutes a murder gravely contrary to the dignity of the human person and to the respect due to the living God, his Creator.? (Catechism of the Catholic Church n.d.). As this is one of the text that Catholics and Christians follow, it is just another reason why the people of the Catholic faith are against euthanasia. Personally, I believe that euthanasia, under any circumstance, is the wrong thing to do. Although it is hard when people suffer through extreme pain, I believe that it is what they are meant to go through, otherwise they wouldn't be going through it, and the euthanasia is the wrong response to a difficult situation. Euthanasia is a difficult ethical issue. When a person is in pain, the right thing to do is to try and help the pain go away. However, making the pain go away is a big difference to actually ending somebody's life. However, some people want to do anything they can to make the pain stop, and therein lies the ethical dilemma. ...read more.