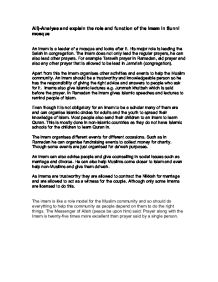 An imam is a leader of a mosque and looks after it. His major role is leading the Salah in congregation. The Imam does not only lead the regular prayers, he can also lead other prayers. For example Tarawih prayer in Ramadan, eid prayer and also any other prayer that is allowed to be lead in Jama’ah (congregation).

Apart from this the imam organises other activities and events to help the Muslim community. An imam should be a trustworthy and knowledgeable person so he has the responsibility of giving the right advice and answers to people who ask for it.  Imams also give Islamic lectures e.g. Jummah khutbah which is said before the prayer. In Ramadan the imam gives Islamic speeches and lectures to remind people of Islam.

Even though it is not obligatory for an Imam to be a scholar many of them are and can organise Islamic circles for adults and the youth to spread their knowledge of Islam. Most people also send their children to an Imam to learn Quran. This is mostly done in non-Islamic countries as they do not have Islamic schools for the children to learn Quran in.

The imam organises different events for different occasions. Such as in Ramadan he can organise fundraising events to collect money for charity. Though some events are just organised for da’wah purposes.

An imam can also advise people and give counselling in social issues such as marriage and divorce. He can also help Muslims come closer to Islam and even help non-Muslims and give them da’wah.

The imam is like a role model for the Muslim community and so should do everything to help the community as people depend on them to do the right things. The Messenger of Allah (peace be upon him) said: Prayer along with the Imam is twenty-five times more excellent than prayer said by a single person.

A mosque, in Arabic known as masjid is a place where people can worship Allah. It plays a big part in the Muslim community. Its main role is to have a place for people to pray in congregational prayers freely. There are many other roles of the mosque in the community.

As we live in a non-Muslim country, Islamic studies is not compulsory in schools so, it is important for the mosques to have classes and circles for children and adults to help people gain more knowledge about Islam. Most mosques in the UK are used as a madrassa (school). Mosques should organise Islamic speeches and lectures so people are constantly reminded of Allah (SWT). Muslims can go to the mosque to learn different things e.g. Quran, Islamic studies, languages like Arabic and Urdu and many other things.

Some mosques mostly the bigger ones have libraries and bookshops where you can borrow and purchase a variety of Islamic books and objects. The prayer hall in a mosque can be used for other things besides prayer. These could be teaching. The hall can also be used for funeral services and the Salatul Janaza (death prayer). The Nikkah for marriage can be done in the prayer hall but the celebration must be done in another room or somewhere else. Some mosques also have kitchens, this is very useful in Ramadan as people can com and  have iftaar (break their fast) there.

To conclude I would say that a mosque is one of the most important thing in the Muslim community as it helps unite the Muslims. Without mosques it would be hard for Muslims to practice Islam freely whenever they want. Also for most men it would be hard for them to complete their duty to pray their Salah in Jama’ah (congregation).