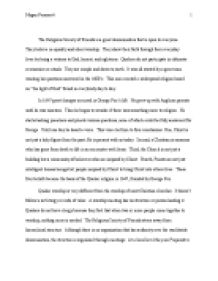 ﻿Megan Personett The Religious Society of Friends is a great denomination that is open to everyone. They believe in equality and silent worship. They show their faith through their everyday lives by being a witness to God, honest, and righteous. Quakers do not participate in elaborate ceremonies or rituals. They are simple and down to earth. It was all started by a great man wanting his questions answered in the 1600?s. This man created a widespread religion based on ?the light of God? found in everybody day to day. In 1647 great changes occurred in George Fox?s life. He grew up with Anglican parents until he was nineteen. Then he began to wonder if there was something more to religion. He started asking preachers and priests various questions, none of which could be fully answered for George. Until one day he heard a voice. This voice led him to four conclusions. One, Christ is not just a holy figure from the past; He is present with us today. ...read more.

Quakers function as a whole body of members brought together to live their daily lives with the light of God shining upon them. The Religious Society of Friends has its? beliefs streaming from Christian views. They believe God is love and that the light of God is in every person. Anyone who lets their days be guided by this light can have a direct occurrence with God without mediation. For this reason, many Quakers reject the idea of priests but believe in the priesthood of believers. Quakers actively strive for peace, social justice, and human rights, including free will, in the world today. The Society of Friends firmly believes in the importance of community life and environmental issues. Quakers believe that all humans contain goodness and are equally worthy of respect. They welcome diversity and don?t discriminate. Quakers truly believe in following their ?inner light? rather than external laws. Quakers are members of a universal religion with many Christian elements. ...read more.

Quakers do not have an overall, common view on abortion, homosexuality, contraception, or euthanasia. Many Quakers use contraceptives and make ?living wills?, stating that if they have no chance for survival without artificial life support, they be allowed to die a natural death. Quakers strive for justice in the world by staying actively involved in politics and society. They do not believe in war and feel that it is God?s wish to strive for peace and unity. Although Quakers do not have set beliefs on all aspects of life, they all strive for honest, just, and good lives. The Religious Society or Friends, or Quakers, is an amazing and deep denomination with many beliefs but the key one and most important of all is the belief that every human being has ?the light of God? inside them. This ?light of God? lives through them every day. The Society of Friends is a great church that anyone could be interested in. Their beliefs and moral codes are very open and stay away from strict teachings and abuses. Quakers may have vague belief systems and structures but they have great faith and unity. ...read more.