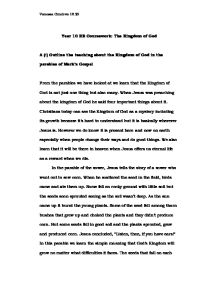 RE Coursework - Kingdom of God

Year 10 RE Coursework: The Kingdom of God A (i) Outline the teaching about the Kingdom of God in the parables of Mark's Gospel From the parables we have looked at we learn that the Kingdom of God is not just one thing but also many. When Jesus was preaching about the kingdom of God he said four important things about it. Christians today can see the Kingdom of God as a mystery including its growth because it's hard to understand but it is basically wherever Jesus is. However we do know it is present here and now on earth especially when people change their ways and do good things. We also learn that it will be there in heaven when Jesus offers us eternal life as a reward when we die. In the parable of the sower, Jesus tells the story of a sower who went out to sow corn. When he scattered the seed in the field, birds came and ate them up. Some fell on rocky ground with little soil but the seeds soon sprouted seeing as the soil wasn't deep. As the sun came up it burnt the young plants. Some of the seed fell among thorn bushes that grew up and choked the plants and they didn't produce corn. But some seeds fell in good soil and the plants sprouted, grew and produced corn. ...read more.

The tenants of the land represent the leaders of Israel and the servants of the owner represent the prophets of Israel. The vineyard itself represents the world and killing the tenants represents God's judgement. However in an allegory there are multiple meanings. When the owner first sent his servants this shows how God sent prophets to tell of his Kingdom but the tenants (leaders of Israel) wouldn't listen. All the wanted was power (the vineyard). God has no option but to send his son Jesus to tell about the Kingdom of God. The leaders of Israel still don't listen so decide to crucify Jesus. When Jesus explains that the owner will come and kill the tenants he means that this is God's judgement and that the leaders of Israel will not be in power forever. A (iii) Explain the use of parables in Mark's Gospel In Mark's Gospel Jesus explains his use of parables. He says that he teaches about the Kingdom of God through his parables. He didn't want to be seen as a threat to Roman power, which may have misunderstood his message. Also in the Gospel Jesus says that if anyone was interested, they could turn to God and find the Kingdom of God by working out the meaning of this message. Many people in Jesus' time could not read or write so listening to stories was one way they learned. ...read more.

For example I think the Da Vinci Code reveals that Jesus had a relationship with Mary Magdalene. But how are these people to know this. What is written in the Bible is what actually happened there's no question about it because the Bible is made up of people who were actually there! In my opinion I think believing God can reward people for doing so much wrong in the world and continuing to sin is hypercritical and that trying to change and see different aspects of Christianity is too. In the Bible many people were rewarded for turning away from sin and maybe if we all tried to do that things would be a whole lot different. In conclusion I believe that this earth can be God's Kingdom because in the end we are all part of God's family regardless of who we are and if we could all resolve the problems in the world together and try to put others' needs before ourselves then the earth would definitely be a better place to live in. However, I understand things are not always that easy. We can all be tempted at times and can find following all the ways of God challenging. But we shouldn't give up all together. We should try our best and think hard before doing things in the future we may regret or we know deep down is wrong and then maybe everything good will fall into place for us, and God's Kingdom will truly be present on earth. Vanessa Omohwo 10.25 ...read more.