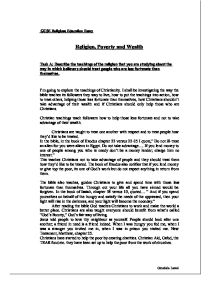 Religion, Poverty and Wealth - Describe the teachings of the religion that you are studying about the way in which believers should treat people who are less fortunate than themselves.

GCSE Religious Education Essay Religion, Poverty and Wealth Task A: Describe the teachings of the religion that you are studying about the way in which believers should treat people who are less fortunate than themselves. I'm going to explore the teachings of Christianity. I shall be investigating the way the bible teaches its followers they way to live, how to put the teachings into action, how to treat others, helping those less fortunate than themselves, how Christians shouldn't take advantage of their wealth and if Christians should only help those who are Christians. Christian teachings teach followers how to help those less fortunate and not to take advantage of their wealth. Christians are taught to treat one another with respect and to treat people how they'd like to be treated. In the bible, in the book of Exodus chapter 22 versus 22-25 I quote," Do not ill-treat an alien for you were aliens in Egypt. Do not take advantage.... If you lend money to one of people among you who is needy don't be a money lender; charge him no interest." This teaches Christians not to take advantage of people and they should treat them how they'd like to be treated. ...read more.

o Most of all Christians may help those in need by prayer. Putting the bible teachings into practise is another way for Christians to show their appreciation to god. For example: Mother Teresa (also known as Agnes Gonxha) is a woman who put all her beliefs into practise. Mother Teresa was born on 26 August 1910, in Macedonia. In 1928 Mother was sent a convent in Ireland, from there she was then sent to Calcutta on 6 January 1929. Mother received the name "Mother Teresa" at a convent. " I help the poorest of the poor. The biggest disease today is not tuberculosis or leprosy, but the feeling of being unwanted. People need to be loved." This is a quote from mother, which shows that the true reason as to why she helps people is because people need to have felt the experience of being loved. Mother has been serving those who need help for about sixty-nine years. Mother devoted all her time to those who needed her help. Mother did not just only help Christians but helped all kinds of people. People with different religions and nationalities. All this didn't matter to her, as mother thought the mind is more sacred than the body. ...read more.

CAFOD's motto is," Its times for justice". Just like every other aid agencies there main aim is to get rid of poverty in the developing world. CAFOD works in partnership with the local people of the poor countries. CAFOD states that its vision is for a world where: * Everyone has a piece of the good things in life. * People should unite as a single human family from which no one is excluded and everyone respects one another. * Lives aren't dominated by greed. * Every human should have access to food, shelter, and water a livelihood, health and education. To obtain Christian beliefs is to why CAFOD exists. It all began when the National Board of Catholic Women. It was from a response to a request from the Caribbean Island of Dominica for help with a mother and baby health care programme. CAFOD are helping to fund 245 self-help projects in 40 countries. They are committed to self-help rather than just handling our supplies to people in poverty, is the importance of providing developing countries with the resources and skills that will help them to help themselves like Christian Aid. There are various reasons as to why Christians feel obliged to help the poor. They feel it their duty to help the poor because there are sources to point them in that direction. Omodele Lawal ...read more.