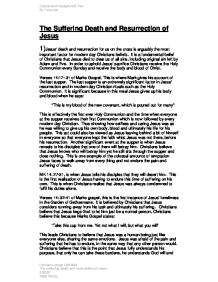 The Suffering Death and Resurrection of Jesus 1)Jesus' death and resurrection for us on the cross is arguably the most important factor for modern day Christians beliefs. It is a fundamental belief of Christians that Jesus died to clear us of all sins, including original sin left by Adam and Eve. In order to uphold Jesus' sacrifice Christians receive the Holy Communion every Sunday and receive the body and blood of Christ. Verses 14:17- 31 of Marks Gospel, This is where Mark gives his account of the last supper. The last supper is an extremely significant factor in Jesus' resurrection and in modern day Christian rituals such as the Holy Communion. It is significant because in this meal Jesus gives up his body and blood when he says: ''This is my blood of the new covenant, which is poured out for many'' This is effectively the first ever Holy Communion and the time when everyone at the supper receives their first Communion which is now followed by every modern day Christian. Thus showing how selfless and caring Jesus was as he was willing to give up his own body, blood and ultimately his life for his people. This act could also be viewed as Jesus leaving behind a bit of himself in everyone so that everyone kept the faith whist Jesus was not there, before his resurrection. ...read more.

This idea is mimicked in 'Harry Potter and the deathly hallows'. The suffering, death and resurrection of Jesus is open regarded as the glue to the faith. Jesus' suffering, his death and the fact that he rose again stuck the religion together in the first place and is the reason so many Christians exist to this day, it is also the key factor that holds the religion together to this date. Being a Christian I believe that Jesus dyeing for us shows great love. Love that can never be broken, because of this love Jesus had for his people it allows us to love in turn. Jesus' death also shows his greatness in manhood. Jesus could have turned and ran from his death at any time, like so many, including myself, would have done in his position, but because of Jesus' undying love for us he resisted all temptation in order to cleanse us of our sins. Jesus' death and resurrection started a belief in Christians that here is life after death. This is a main reason as to why Christians no longer fear death. Christians solely believe that as Jesus gave each one of us a part of him during Holy Communion we can in turn be like Jesus and live after we have died. ...read more.

Jesus lived in different times with different circumstances to us and the world we live in today. In the past people died to protect their beliefs or most commonly people died because someone else tried to impose a different belief upon them. In England and most countries this does not happen because everyone has human rights. However in some countries people are discriminated against because of their beliefs and people are forced to deny their beliefs or die, I would agree with dying for ones belief because no-one should have have some one else's will imposed upon them. Others,such as Muslim extremists, think that blowing themselves and others up is a good way to die for their religion. I do not see any logic in this view because surely by terrorising others in the name of your religion just gives it a bad name and ultimately disrespects your God. Personally I can see why one might die for ones' beliefs, but I don not agree with doing it personally as Jesus died so that we can have a good life. I do not see any logic at all in cutting short a life what ever the reason as by doing so we are basically doing ourselves and Jesus a disservice. We are not making the most of our opportunities and being extremely selfish as many people have put a lot of work into making sure we survive into adult hood. ...read more.