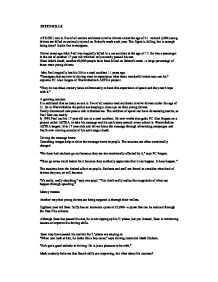 SPEED KILLS AT RISK | one in five of all serious accidents involve drivers under the age of 21 Around 2,000 young drivers are killed or seriously injured on Britain's roads each year. The figure is falling, but is enough being done? Inside Out investigates. Eleven years ago John Paul was tragically killed in a car accident at the age of 17. He was a passenger in the car of another 17 year old who had only recently passed his test. Since John's death, another 40,000 people have been killed on Britain's roads - a large percentage of those were young drivers. John Paul tragically lost his life in a road accident 11 years ago "Teenagers that are new to driving want to experience what these wonderful motor cars can do," explains PC Alan Rogers of Warwickshire's ASTRA project. "They do use these country lanes unfortunately to have this experience of speed and they can't cope with it." A growing concern It is estimated that as many as one in five of all serious road accidents involve drivers under the age of 21. So in Warwickshire the police are keeping a close eye on their young drivers. Poorly maintained cars pose a risk in themselves. The addition of speed can have devastating results, as Paul Kerr can testify. In 1992 Paul lost his 17 year old son in a road accident. ...read more.

Teenage death drivers Drivers aged 16-17 are 39% more likely be killed with one passenger 86% more at risk with two passengers The overall death rate per 10 million trips for a 16-year-old was 1.99 with no passengers 2.76 with one passenger 3.69 with two passengers 5.61 with three or more passengers And more than 3,000 people a year are killed on Britain's roads with car crashes the main cause of death among teenagers. Dave Rogers, road safety adviser for the Royal Society for the Prevention of Accidents, said: "It is a known problem that where young drivers are out with their mates, they are far more likely to egg each other on, and drive in dangerous ways, for instance drinking and speeding. "We would like the UK, and Europe to look at the whole idea of graduated licensing and find out what sort of system works best. "What we need to look at are ways to teach youngsters how to drive safely rather than just how to pass the test." One idea is to introduce "log books" for learner drivers, who would have to submit evidence to the DVLA to prove they had sufficient driving experience before they were given a full licence. Speed kills Drivers travelling too fast for the conditions contribute to the numbers of deaths and injuries on our roads. Speed contributes to more than one in five of New Zealand's road deaths every year. ...read more.