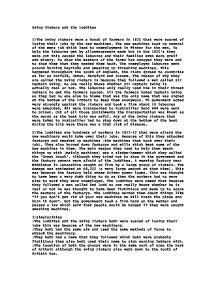 Swing Rioters and the Luddites 1)The Swing rioters were a bunch of farmers in 1830 that were scared of losing their jobs by the new machines. The new machines took up several of the mens job which lead to unemployment in Winter for the men. To help the laboures get by allowenceswere made but in the 1820's they were cut this caused the laboures and their families even more greif and misery. To show the masters of the farms how annoyed they were and to show them that they needed them back. The unemployed laboures went around burning hayricks and smashing up threshing machines. This happened throughout the south of England, the riots spread to countries as far as Norfolk, Devon, Hereford and Sussex. The reason of why they are called the Swing rioters is because they followed a man called Sir Captain Swing. No one really knows whether Sir Captain Swing is actually real or not. ...read more.

This was because the factory held steam driven power looms. This was thought to have been a very dumb thing to do as then the workers had no were else to work they were unemployed. The Luddites were named that because they followed a man called Ned Ludd no one really knows whether he is real or not he was thought to have been fictitious and made up to scare the masters of the factorys. The Luddites warned them about things like "if you don't get rid of your new machines we will trash the place and burn it down". But the govermaent took a firm hand on the matter and passed a law which said that people would be hanged if they were caught smashing machines. 3)Simalarities :The Luddites and the swing rioters both were scared of losing their jobs this was because of the new machinery. ...read more.

But the fact was they couldn't easily get toghether and chat because the goverment had passed another law saying that there was only to be 3 or less people allowed to meet at once The goverment was making it as hard as possible for the people to start a roiot or what they where scared of a revouloution. This meant that they couldn't disscuss anything very well and that their actions weren't planned out. The final reasons of failment was limited support and lack of leadership the groups only had workers that had been sacked to back them up, there were quite a lot of peple sacked as every machine took up several workmens jobs but there still wern't enough people to overpower the rest. They also needed a real leader the fake leaders they used were fine for a while but I'm sure the victims or the letters cracked the secret. As the people following the name had no proof of the man and the leader had never been seen or showed before the fake leader secret thing wasn't a good idea. ?? ?? ?? ?? ...read more.