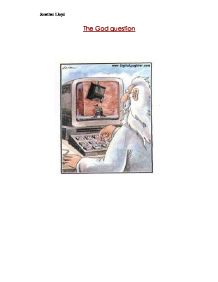 The God question The question of whether a higher being governs all of existence has been pondered since man gained sentience. This may stem either from the need for some form of reasoning and even justification for our existence. Or from the human aspiration to be omnipotent and omniscient, by creating a God man has enabled himself to have the opportunity to become one, or logically stated; * God creates man * Man kills God * Man becomes God * God creates man... This also begs a semantic yet crucial question; is God a noun or an adjective? Does one worship a God or a being which is God? This, although quite simplistically put this is a very important point. All if not most religions upon asking would state quite bluntly that God was obviously a proper noun, yet looking at the language in a fair few holy books it seems, if on a base level, to fall into the behaviour patterns of a adjective, ergo making it possible for the reader to perceive the possibility of them gaining the power which this fictional God possesses. ...read more.

Without a logical method of proving God there is only one options for theists, to make a leap of faith, in other words to believe in something without sufficient evidence to justify that belief, this factor is key to many of the mainstream religions. The fact that we would cross this gap is also a key point in the human psyche; if we have the urge to have an all powerful being with us to such a degree as to consciously make that jump then there must be many underlying reasons for that urge. This pure faith can be said to be a sign of devotion to the God you worship thus making you worthy, therefore there need not be any tangible evidence for God because then the act of faith would become meaningless ergo the very lack of evidence for this being is the factor which will convince theists of his existence. Many religions state that our creation must have been an act of love and compassion from a greater being, but how can such a compassionate loving being knowingly create such an antagonised destructive race, unless of course this life is simply a test of our faith, but what of those who have faith and still suffer? ...read more.

theorists of our time these suggest, to me, that the possibility of a being such as this is unlikely if not impossible due to it's sheer implausibility, a motive for it to be fictional, not to mention that in most cases is it a contradiction in terms. All of these arguments simply circle and we have yet to come to a definitive conclusion, thus without more evidence either way we gain nothing from the debate of the nature of God. Also the God argument uses reverse logic which has been proven to be invalid, in that in correct logical processing we have a premise statement and a relational statement and attempt to derive a solution from that; however in the God problem we have a solution (The existence or non-existence of God.) and attempt to achieve a premised statement and a relational statement that allow for our original conclusion. This in turn is incorrect logic, thus rendering any form of this argument invalid. Although despite its futility I believe this debate will continue until the end of man's existence because, if we have no creator to argue for or against then what purpose do we have? ?? ?? ?? ?? Jonathan Lloyd ...read more.