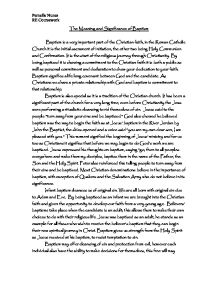 The Meaning and Significance of Baptism

The Meaning and Significance of Baptism Baptism is a very important part of the Christian faith, in the Roman Catholic Church it is the initial sacrament of initiation, the other two being Holy Communion and Confirmation. It is the start of the religious journey through Christianity. By being baptised it is showing a commitment to the Christian faith it is both a public as well as personal commitment and declaration to show your dedication to your faith. Baptism signifies a life long covenant between God and the candidate. As Christians we share a private relationship with God and baptism is commitment to that relationship. Baptism is also special as it is a tradition of the Christian church. It has been a significant part of the church for a very long time; even before Christianity the Jews were performing a ritualistic cleansing to rid themselves of sin. Jesus said to the people "turn away from your sins and be baptised." God also showed he believed baptism was the way to begin the faith as at Jesus' baptism in the River Jordan by John the Baptist, the skies opened and a voice said "you are my own dear son, I am pleased with you." This moment signified the beginning of Jesus' ministry and for us too as Christians it signifies that before we may begin to do God's work we are baptised. ...read more.

The exorcism, the getting rid of evil spirits and anointing is where all possible evil that may have control over the child is driven away. Despite the fact that evil had been rid, the child still posses free will and can deliberately make the choice to sin, however once they are baptised, they can ask for God's forgiveness and have their sins absolved. The oil of catechumens is anointed on the chest of the infant. The oil is a sign of strength and healing. It gives the infant the inner strength to resist the temptation of sin. When the infant is brought to the font, the water; a sign of cleansing and washing away of sins and original sin, is blessed. The parents and godparents renew their baptismal promises to show they too believe in the faith they have selected to raise their child in. This is done as the infant cannot make these promises themselves. The blessed water is poured three times on the forehead of the infant; this is signifying the Holt Trinity. The priest then says "NAME, I baptize you in the name of the Father, the Son and the Holy Spirit." This is the moment where the actual sacrament of baptism occurs. The child is anointed with Chrism oil, to assist the child in the challenges they will receive during their journey of faith. ...read more.

By being baptised into the Roman Catholic Church, the other six sacraments can be received, allowing the infant to continue their journey of faith throughout their life. Jesus loved children, so he would want them to share in baptism as well. Although a child may not fully understand baptism, they have the choice to continue their faith at Confirmation so their parents make another one of the numerous decisions they must make while their child is still young. As well as religious benefits for the baby, practical benefits include being accepted more easily into a Christian school. In my personal opinion, I think the advantages of being baptised as a baby outweigh the disadvantages. I do however understand that a baby has no credible understanding of the concept of baptism; this is why I believe it is important to have confirmation at a much later age, where a young person can make the decision on whether to continue their faith. As a young person who was baptised as a baby, I feel it helped me to develop my individual identity, also by being part of a church community I have been able to expand my knowledge on different faiths but as well as have the opportunity to believe that God has control over certain things in life. Pernelle Nunez RE Coursework ...read more.