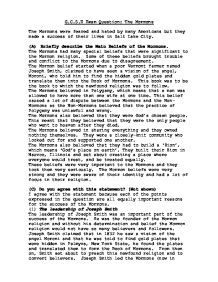 G.C.S.E Exam Question: The Mormons The Mormons were feared and hated by many Americans but they made a success of their lives in Salt Lake City. (A) Briefly describe the Main Beliefs of the Mormons. The Mormons had many special beliefs that were significant to the Mormon religion. Some of these beliefs brought trouble and conflict to the Mormons due to disagreement. The Mormon belief started when a poor Vermont farmer named Joseph Smith, claimed to have seen a vision of the angel, Moroni, who told him to find the hidden gold plates and translate them into the Book of Mormons. This book was to be the book to which the newfound religion was to follow. The Mormons believed in Polygamy, which means that a man was allowed to have more than one wife at one time. This belief caused a lot of dispute between the Mormons and the Non-Mormons as the Non-Mormons believed that the practice of Polygamy was unlawful and wrong. The Mormons also believed that they were God's chosen people. This meant that they believed that they were the only people who went to heaven after they died. ...read more.

Here, Joseph Smith started to build their Zion (holy city) and was determined that the Mormons would not be driven out. By 1842, the Mormons army was 2,000 strong and Joseph Smith decided to run for President of the U.S. As you can imagine, this caused a lot of conflict between the Mormons and the Non-Mormons. In June 1844, Smith and his brother, Hyrum were captured and imprisoned and on 27th of June, an angry mob attacked the jail were Smith was being held, and Joseph Smith was shot and killed, alongside his brother. (2) The leadership of Brigham Young This man, Brigham Young was a very determined young man, who was very clever and had a sense of responsibility. He was dedicated to the Mormon religion and claimed to have converted 9,000 people while on a mission to Britain. He gained the respect of the Mormon community when he led them out of Missouri during the time when Smith was in prison. When Young returned from a campaign supporting Smith's Presidency, he assumed leadership when Smith had been killed. He had an enormous effect on the Mormons. ...read more.