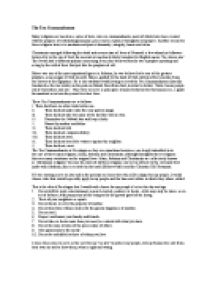 The Ten Commandments for Modern Times.

﻿The Ten Commandments Many religions are based on a series of laws, rules or commandments, most of which have been created with the purpose of establishing harmony, peace and acceptance throughout all peoples. Another reason for these religious laws is to maintain and protect humanity, integrity, honor and virtue. Christianity emerged following the death and resurrection of Jesus of Nazareth a Jew whom his followers believed to be the son of God, the messiah or meshiach which translated to English means ?the chosen one?. The Jewish had a different opinion concerning Jesus, they believed that he was a prophet speaking and acting by the will of their God just like the prophets of old. Moses was one of the most important figures in Judaism; he was believed to be one of the greatest prophets, a messenger of God on earth. Moses, guided by the hand of God, delivered the Israelites from the slavery of the Egyptians. He is also attributed with having received the Ten Commandments (literally translated as the ten words) on the peak on Mount Sinai from God, in order to deliver ?Gods chosen people out of wickedness and sin?. They were to serve as principles of moral behavior for the human race, a guide for mankind as to how they must live their lives. ...read more.

Some of my rules are already law in many countries, in order to help and maintain the protection of all and to bring those who do wrong to justice. One of my ten rules is ?do not steal? and in Britain and most other countries theft is already a punishable crime depending on the situation, theft goes against the current political law and the laws of morality and decency. I believe that it would be in the best interest of many people to take up my rules as law to improve the lives of themselves and of others. The specific rules that I believe should become law are: treat all your neighbours as equals and do not kill for sport, entertainment, research, hatred or desire. A life may only be taken in serious cases as an act of defense or mercy, with the permission of the being or the greater good of the living. I realize that there are similar laws already in the justice system although I believe that my variation on these original laws will be of more use than the ones currently in place. My rule regarding the taking of a life includes more specific situations in which a life may be lost. The Ten Commandments are of great importance to many of the different religious faiths and their followers, especially Christianity, Judaism and Islam. ...read more.

seems to urge Islamic follower to conform to these religious laws, although the actual text of the Ten Commandments is not contained in the Qur?an. People of different religions respond to the Ten Commandments in different ways. Some might disregard them altogether while others meekly abide by them. The Ten Commandments are a brief summary of certain basic rules of behavior and good conduct some of which should relate to societies throughout time, although nowadays the commandments do not specifically address some of the most common of moral controversies, such as abortion, corporal punishment, assisted suicide, and homosexuality. Those of non Abrahamic religion may have qualms with following some of the commandments in the Decalogue such as the first four regarding God and how he must be served and kept sacred. This is because it may interfere, either with their own religion or their own personal views. The other six commandments are common sense laws that most people, no matter what their religious yearning, seek to follow to their best abilities, partly to do good and partly for fear of the ultimate punishment. Personally I believe that the Ten Commandments are extremely valuable rules for the world today to follow and abide by, in order to make the world a better place and maintain peace and harmony. The human soul is careless, flawed and imperfect and no matter what rules are put forward, where there is temptation, sin follows close behind and the consequences loom in the distance. ...read more.