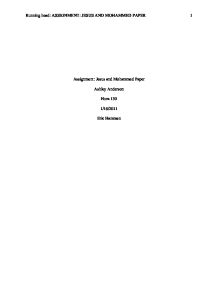 This paper reflects the lives of the historical figures Jesus and Mohammed, showing the impact their life and death had on each religion, as well as the journey that lead them there.

Assignment: Jesus and Mohammed Paper Ashley Anderson Hum 130 1/16/2011 Eric Hammen Assignment: Jesus and Mohammed Paper For centuries Jesus and Mohammed have been interpruted as being same but in different religions. However, these historical figures were born at separate times and are intact very different prophets. The similar aspect of these figures is that both served a higher purpose to help others while on Earth. During a strong Judaism era, Mohammed promoted Islam andJesus promoted Christianity. Both figures helped establish, strengthen, and shape their respected faiths. This paper reflects the lives of the historical figures Jesus and Mohammed, showing the impact their life and death had on each religion, as well as the journey that lead them there. The story of Jesus Christ; his mother "the Virgin Mary" was visited by an angel and told she would become pregnant by the holy spirit and would give birth to the son of God and name him Jesus. As for told, by means of "Immaculate Conception" Mary a virgin before, during, and after became pregnant. Mary was married to Joseph a carpenter from Bethlehem who had an encounter with an angel, was told to raise the child and name him Jesus. During pregnancy Mary and Joseph traveled to Bethlehem, upon arriving had nowhere to stay. ...read more.

Jesus was sent to Pontius Pilate, the Roman Governor for questioning. The people filled the streets urging for the death of Jesus, and so he was given to military guards where he was crucified give cross and beaten. According to the gospels, Jesus had been hanging on the cross for hours when he cried out "My God, my God, why hast thou forsaken me" (Fisher, 2005, p.301.) The disciples of Jesus hid in fear after the crucifiction. Moreover, many of his disciples claimed they had been visited by Jesus. Those who witnessed the resurrection of Jesus helped shape Christianity, and gain strength in the Roman Empire. Many people believed that Jesus was God in human form (fisher, 2005, p.302.) Saul, who was an intimidator of Christians, was deeply influenced by the resurrection that changed the minds of many, including him. Christ visited him and was instructed "to open their eyes that they may turn from darkness to light, and from the power of Satan to God, that they may receive forgiveness of sins, and place among those who are sanctified by faith in me" (Fisher, 2005, p. 303.) Saul's Life changed after the death of Jesus; with a new mission to spread Christianity across the Mediterranean and help expand its growth. ...read more.

In 632 CE Mohammed passed with no named successor. Ali, Mohammed's son, became the new heir to Medina. Mohammed helped create moral order for the Islam religion and his death opened the eyes of the people. Much like Christianity the religion spread and still grows even today. Without Mohammed's messages from God there would be no Qur'an, which has remained the same throughout history. Jesus and Mohammed are similar in their methods of work but in different religions and times. Jesus worshipped as the Savior when born and after death. Jesus is worshipped for remembrance of dieing for the sin of all humanity and his resurrection. The cross a prominent symbol in Christianity, along with baptism and communion, and other sacraments and rituals all refer to his death and resurrection. Christians pray to God the father, the Son, and the Holy Spirit. Mohammed is not worshipped; He is a prophet, a messenger of Allah. Muslims strive to live as he did, following the Five Pillars set forth in his revelation. Both historical figures messages are of equal importance to their respected religion and both are still being carried out today. Reference Fisher, Mary Pat (2005). Living Religions, Chapters 9 and 10. aXcess, HUM130 - Religions of the World. ?? ?? ?? ?? ASSIGNMENT: JESUS AND MOHAMMED PAPER 7 Running head: ASSIGNMENT: JESUS AND MOHAMMED PAPER 1 ...read more.