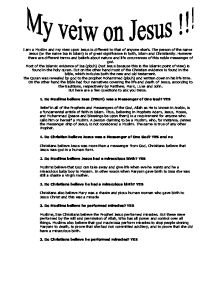 I am a Muslim and my view upon Jesus is different to that of anyone else's. The person of the name Jesus (or the name Isa in Islam) is of great significance in both, Islam and Christianity. However there are different terms and beliefs about nature and life occurrences of this noble messenger of god. Most of the Islamic evidence of Isa (pbuh) (not Jesus because this is the Islamic point of view) is found in the holy quran. But on the other hand most of the Christian evidence is found in the bible, which includes both the new and old testament. The Quran was revealed by god to the prophet Mohammed (pbuh) and written down in his life time. On the other hand the bible had four narratives covering the life and death of Jesus, according to the traditions, respectively by Matthew, Mark, Luke and John. But here are a few questions to ask you twice. 1. Do Muslims believe Issa (PBUH) was a Messenger of One God? YES Belief in all of the Prophets and Messengers of the God, Allah as He is known in Arabic, is a fundamental article of faith in Islam. Thus, believing in Prophets Adam, Jesus, Moses, and Muhammad (peace and blessings be upon them) is a requirement for anyone who calls him or herself a Muslim. ...read more.

However, it is interesting to note that the term "son of God" is used in other parts of the Bible to refer to Adam, Israel and David as well. The creation of God is usually referred to in the Bible as children of God. I wonder why? 6. Do Muslims believe Jesus was killed on the cross then resurrected? NO The Muslims believe because of the people at that times saying, 'We killed Messiah Jesus, son of Mary, the Messenger of Allah" people beloved them and still do. But Muslims believe they didn't kill him, or crucifies him. But god created another man a complete copy and they killed him instead. But issa (PBUH) was brought up to the heavens by god. 6. Do Christians believe Jesus was killed on the cross then resurrected? YES This is a core Christian belief and it relates to the theory of atonement. According to this belief, Prophet Jesus died to save mankind from sin. However, this is not stated explicitly in the four gospels which form the primary source texts of Christianity. Christians believe Jesus was spat on, cut, humiliated, kicked, striped, and finally hung up on the cross to endure a slow and painful death. But those were just a few differences and similarities between Muslims and Christians belief in Jesus. ...read more.

He told them to return when they had found the baby so that he could worship the child himself. The Wise Men set off to find the baby. They were guided by the star to the stable in Bethlehem. Here they knelt down and worshipped Jesus. They gave him gifts of gold, frankincense and myrrh. That night, the men had the same dream where an angel warned them that King Herod wanted to kill Jesus and told them not to go back to his palace. The Wise Men went back to their own country without calling to see Herod. Soon after Joseph had a dream where an angel told him to take Mary and Jesus to Egypt as King Herod had ordered that Jesus be killed. They left Bethlehem right away. When the wise men did not return, Herod ordered that baby boys in Bethlehem be killed. They did not find Jesus as he was safe. But then we found out at the beginning of this year that we were being lied to all along, Christmas was actually a festival that took over a normal winter festival. But as a Muslim I do not believe in Christmas at all because we don't have any concrete evidence when he was born we don't celebrate his birth. So basically being a Muslim I don't believe in any of the Christmas story. This is my point of view of Jesus!!!! ...read more.