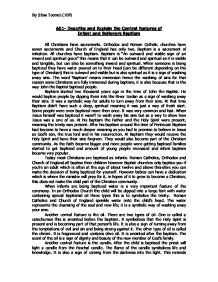 What do we mean when we talk about the Japanese lifetime employment system?

A01- Describe and Explain the Central features of Infant and Believers Baptism All Christians have sacraments. Orthodox and Roman Catholic churches have seven sacraments and Church of England has only two. Baptism is a sacrament of initiation. All churches have baptism. Baptism is "An outward and visible sign of an inward and spiritual grace" this means that it can be outward and spiritual as it is visible and tangible, but can also be something inward and spiritual. When someone is being baptized they have water poured on to their head (can be different depending on the type of Christian) this is outward and visible but is also spiritual as it is a sign of washing away sins. The word 'Baptism' means immersion hence the washing of sins for that reason some Christians are fully immersed during baptism, it is also because that is the way John the Baptist baptised people. Baptism started two thousand years ago in the time of John the Baptist. He would baptize people by dipping them into the River Jordan as a sign of washing away their sins. It was a symbolic way for adults to turn away from their sins. At that time Baptism didn't have such a deep, spiritual meaning it was just a way of fresh start. Some people were even baptized more then once. It was very common and fast. When Jesus himself was baptized it wasn't to wash away his sins but as a way to show how Jesus was a one of us. ...read more.

When they get baptized it is in a baptistery which is like swimming pool and sometimes when the church doesn't have a baptistery they would use a pool instead. During the ceremony people will sing hymns, listen to readings from the Bible and a sermon is read by the priest. The candidate must state and explain its reasons for getting baptized. This is called a testimony. The candidate would have a sponsor which is a Christian who supports them. The candidate is fully immersed into the pool. Often candidates walk into the pool and walk out from the other side as a sign from turning away from their sins and candidate shouldn't look back, because that would be like looking back at your sins. When the candidate comes out of the pool the sponsor is ready with a towel to dry them off. The ceremony ends with hymns and a final blessing from the minister. A02 - Explain How Infant Baptism Would Make a Difference to the Life of a Christian Today Being baptized as a child would make quite an impact on your life. It could change who you are. Infant baptism would make a significant influence on your upbringing. If Christians are baptized as children they would be part of the Christian community and may go to Christian schools and further their knowledge and understanding of the faith, along side other people who are just like them and are growing within the faith. ...read more.

Fourthly it is good to be baptized as a baby so you can grow up as a Christian and go to a Christian school; therefore you can grow and learn about your faith, it is also good because the people around you can set you a good example of being a good Christian. Lastly I think is important to that you are brought up as a Christian as you are given that choice later on to be confirmed, which is important to do out of their own free will. However other Christians might agree and say that being baptized as a baby is pointless because they are only babies so they don't know what they are doing, the decision is being made for them. That means they can't appreciate the full experience of baptism and what it means. Secondly people might say that babies haven't sinned so it is pointless to baptize them because they have not sins to clean. Thirdly some Christians might say that if you are baptized when are an adult you will be a better Christian as you have become a Christian out of choice which means that you will be dedicated to being a Christian. Whereas some Christians that are baptized as babies might come to resent the faith and might not longer want to be Christians as they have been forced to get baptized and learn about it. Lastly some Christians might say it's pointless to be baptized as a baby as Jesus himself was baptized as an adult and Christians are meant to live like Jesus. Therefore they can not be a good a Christian. By Sima Toorani (10F) ...read more.