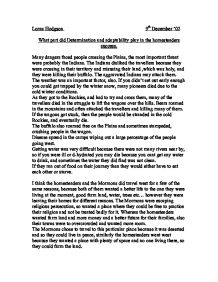 What part did Determination and adaptability play in the homesteaders success.

Lorna Hodgson 9th December '02 What part did Determination and adaptability play in the homesteaders success. Many dangers faced people crossing the Plains, the most important threat were probably the Indians. The Indians disliked the travellers because they were crossing in their territory and misusing their land ,which was holy, and they were killing their buffalo. The aggravated Indians may attack them. The weather was an important factor, also. If you didn't set out early enough you could gat trapped by the winter snow, many pioneers died due to the cold winter conditions. As they got to the Rockies, and had to try and cross them, many of the travellers died in the struggle to lift the wagons over the hills. Bears roamed in the mountains and often attacked the travellers and killing many of them. ...read more.

The Mormons were escaping religious persecution, so wanted a place where they could be free to practice their religion and not be treated badly for it. Whereas the homesteaders wanted farm land and more money and a better future for their families, also their towns were to overcrowded and wanted more room. The Mormons chose to travel to this particular place because it was deserted and so they could live in peace, similarly the homesteaders went west because they wanted a place with plenty of space and no one living there, so they could farm the land. They both had heard about the great beautiful land, because of all the propaganda and letters home, so they both went because of what other people had told them. The Mormons all went together in a group, same as the homesteaders they travelled west because everyone else was doing it. ...read more.

Many of the homesteaders were forced to go back home because they had failed, no Mormons had this problem. The Mormons achieved what they asset out to do. They wanted a place where they could be free, and that's what they got. The homesteaders, wanted a better life, however many did not get this and were worse than before. The biggest achievement of the Mormons was when Utah became a state. This lets them do whatever they want, and be totally free, and even have a Mormon leader who could help the Mormons to grow. The Mormon religion spread rapidly, and they were very successful in it. The Mormons even managed to keep practicing polygamy. I think that the Mormons did extremely well considering the fact that originally they were persecuted, their leader killed, and having to flea their homes and start a new life many times. To get a great life, lots of money, and free Mormon society was a big accomplishment. ...read more.