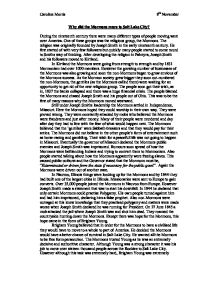 Why did the Mormons move to Salt Lake City?

Why did the Mormons move to Salt Lake City? During the nineteenth century there were many different types of people moving west over America. One of these groups was the religious group, the Mormons. The religion was originally founded by Joseph Smith in the early nineteenth century. He first started of with very few followers but quickly many people started to come round to Smiths way of thinking. After developing the religion in Palmyra, Joseph Smith and his followers moved to Kirtland. In Kirtland the Mormons were going from strength to strength and by 1831 Mormonism had over 1000 members. However the growing number of businesses of the Mormons was also growing and soon the non-Mormons began to grow envious of the Mormons success. As the Mormon society grew bigger they soon out-numbered the non-Mormons, the gentiles (as the Mormons called them) were waiting for an opportunity to get rid of the new religious group. The people soon got their wish, as in, 1837 the banks collapsed and there was a huge financial crisis. ...read more.

Again the Mormons were driven out of another state. In Nauvoo, Illinois things were looking up for the Mormons and by 1844 they had built one of the largest cities in Illinois. Missionaries were sent to Europe to gain converts. Over 35,000 people joined the Mormons in Nauvoo from Europe. However Joseph Smith made a statement that was to start his downfall. In 1844 he declared that only certain Mormons could practise Polygamy. His own people turned against him and had him imprisoned, declaring him a false prophet. Also non-Mormons were outraged at this knew knowledge that they practised polygamy and matters were made worse when Joseph Smith declared he was running for President. On 27 June 1845 a mob attacked the jail where Joseph Smith was and shot him dead. They roamed the countryside hunting down the Mormons. Except there was hope for the Mormons, this hope came in the form of Brigham Young. Brigham Young believed that in order for the Mormons to have a civilised life they would have to move to a whole to part of America. ...read more.

The Mormons suffered and un-easy life and their hard work just got them hated by the other people they were surrounded by. They were thought of as, 'public enemies', by many of the people in the various places they settled in. for over ten years they were persecuted for being, 'different'. The truth is that they were misunderstood by the non-Mormans and that although he was a strong leader Joseph Smith made some fatal mistakes as a leader. He made statements about his religion which was prejudice against some Mormons. And after his statement on polygamy the 'gentiles' felt mistrusted on how the Mormons had kept this way of life to themselves; thus resulting in more trouble and hate. The main reason why the Mormons moved to Salt Lake City was the fact that they had no other choice. They had tried living in four different states and they were forced out of each one. The suffered extreme prejudice and torment. They had no other choice but to move to Salt Lake City. It was not really out of choice that they moved but in order for them to have safety and security. Caroline Morris 8th November ...read more.